Delegates at GMB Annual Congress posed for a photo with Penelope Walford’s ‘Show us the Books’ t-shirts. 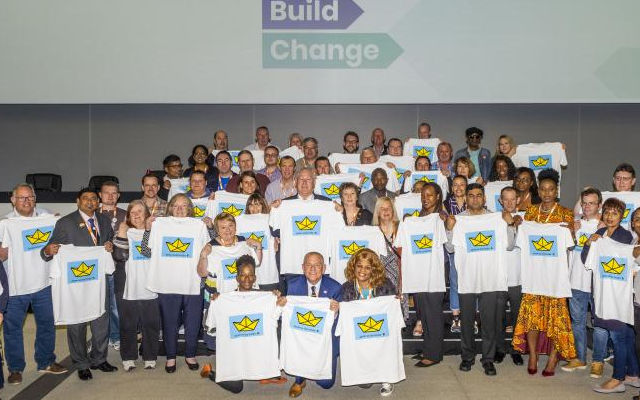 The ‘Show us the Books’ campaign being led by Isle of Wight artist, Penelope Walford, reached as far as the GMB Annual Congress in Brighton last week.

Penelope’s latest approach to shine a light on the accounts of Bembridge Harbour is through the production of t-shirts with a ‘Show us the books’ illustration front and centre. As reported, Penelope was offering them free of charge to anyone who wanted to help spread the word of the campaign.

Delegates pose with t-shirts
Last week delegates at the GMB Annual Congress posed for a photo with the t-shirts.

Residents in Bembridge, which includes former GMB General Secretary, Sir Paul Kenny, brought the situation surrounding the Harbour to the attention of the union.

The GMB attended a public meeting in December in the village, where local residents discussed their concerns about the future of the harbour.

“Despite community attempts to bring a greater degree of public transparency to the financial management of the Harbour, the time has come for [owner] Mr Thorpe to show us the books.

“The impact on direct employment and the maintenance and growth of leisure activities mean urgent public scrutiny of the Harbour’s long term viability is vital.

“It is time for Mr Thorpe to meet with concerned residents and answer their questions.”

Thorpe: Investigation questions answered
Malcolm Thorpe of Bembridge Harbour told OnTheWight the Harbour submits its annual accounts to the Department for Transport, as well as the Isle of Wight Council.

“A number of very thorough and comprehensive investigations and reports have been carried out by, or on behalf of, the Isle of Wight Council as a result of representations made to them by the [Bembridge Harbour] Trust.

“This involved answering their many financial questions, all of which were answered fully and to their satisfaction.”

newest oldest most voted
Mason Watch
Oh dear, the utter bullsh*t coming out of the bitter and twisted elements of the Harbour Trust have conned people who are totally irrelevant. More rubbish spouting from ‘the artist’. Perhaps the question should be what exactly does the ‘charity’ ie the Trust actually do in terms of charity work? They appear to be a bunch of jealous sad sacks who never got over losing out on… Read more »
Vote Up2-2Vote Down
1penny
As always, you need to read Mr T’s words carefully… he may not be saying quite what you think. In fact there has been NO investigation of the kind implied. The community is STILL waiting for answers to the 9 questions posed in the 2016 legal report. Mr T has answered NONE of them fully; NONE were backed up with evidence (bar one – which showed that… Read more »
Vote Up5-6Vote Down
1penny

Hi Rob. I see you changed your name. How’s the trolling going?

Wow, apparently asking questions about the alleged charity is now trolling. That’s rich coming from someone who makes a career out of it. You are, to quote another obsessed individual, FAKE NEWS. It’s a shame to see how jealousy and bitterness can drive an individual and ‘charity’to make trouble on a semi professional basis whilst pretending to help the community.