ingAbout is a fun and social music therapy which can help to maintain memory and improve mood and well-being. Workshops start in Ventnor on 9th July

Independent Arts is delighted to announce the launch of the fourth SingAbout group in Ventnor on Monday 9th July. 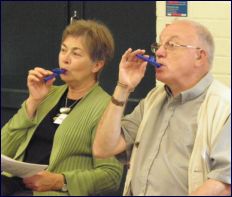 SingAbout is a fun and social music therapy which can help to maintain memory and improve mood and well-being.

SingAbout is based on the Alzheimer’s Society model called ‘Singing for the Brain’ which is a recognized form of therapy specifically developed for Alzheimer’s and other dementia sufferers, although it is beneficial to anyone who wishes to improve their memory, breathing, movement speech and confidence.

It works by stimulating, improving and maintaining the brains neurological pathways, however, the sessions have a much wider benefit to both carers and participants by providing a fun group activity and encouraging social interaction.

“I think SingAbout is great. I like coming; it is an oasis in the middle of my week. I love singing and the relaxed atmosphere. Also the fact that there are no hard and fast rules. This is a very relaxed, nice group of people who are fun to be with. I find it very therapeutic. Also we don’t keep singing the same old songs which could become stale; there is a nice degree of variety.” (SingAbout participant)

Independent Arts
SingAbout was piloted by Independent Arts in 2010, with groups in Freshwater, Newport and Ryde being established in 2011. These existing groups are going from strength to strength with attendance numbers regularly reaching over 25 participants per session.

The launch of the fourth group in the South Wight follows extensive fundraising by Independent Arts to sustain and grow the SingAbout project. The charity has raised over £70,000 in the last 18 months to fund SingAbout, meaning that the sessions can continue to be delivered at no cost to participants.

For any further information about SingAbout, please contact Caroline Ash, Project Manager at Independent Arts on 822437 or at caroline@independentarts.org.uk

Filed under: Community, Ventnor, What's On