The team at South Boats in Cowes have been working on a refit of Yarmouth RNLI’s Severn Class Lifeboat, the ‘Eric & Susan Hiscock’. 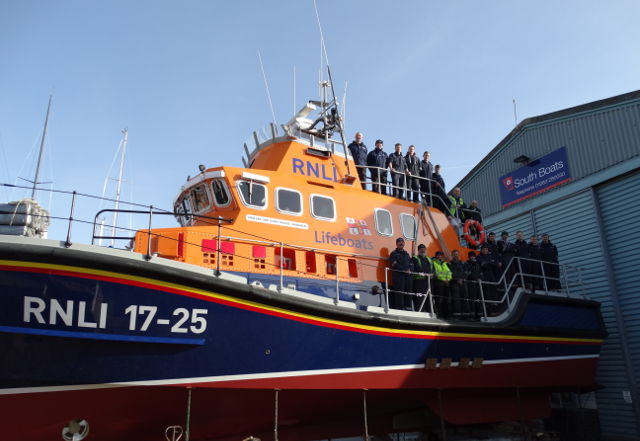 Thanks to Ben for sharing this latest news. Ed

South Boats IOW Ltd. is proud to announce that its latest Severn Class Lifeboat refit has been completed, trialled and successfully accepted back into service for the Royal National Lifeboat Institution (RNLI).

The ‘Eric & Susan Hiscock (Wanderer)’, one of forty six Severn Class Lifeboat’s in service with the Royal National Lifeboat Institution was built on the Isle of Wight by FBM Marine Ltd. back in 2001 and the vessel has been stationed at Yarmouth on the Isle of Wight ever since.

Refitted on same site she was built
Refitting the vessel at South Boats IOW is particularly poignant as the vessel returns to the site where she was originally built and with the refit work carried out in part by some of the personnel that were originally involved with the construction.

Late in 2015, within South Boats IOW’s framework agreement, the RNLI awarded a full condition based maintenance refit of the Severn Class Lifeboat to South Boats IOW.

What that’s involved
Work scope has included full external preparation and repaint of hull, decks, superstructure, fittings and components as well as a full internal refit with refurbishment of components.

In line with the development of the fleet, the vessel has also had a full repower with MTU 10V-2000 main engines.

“The yard is very proud of its association with the Royal National Lifeboat Institution and to be part of a team and process that makes UK Lifeboats the envy of search and rescue organisations around the world.

“For the Isle of Wight it is fantastic that we can support our local lifeboats at the yard.

“Under our framework agreement we already have the Penlee Lifeboat in refit and planning for Thurso and Aran Islands Lifeboats. In addition we have just completed repairs on the Bembridge and Dover Lifeboats in parallel to the refit programme.”

Well done to the workers at South Boats these are the skilled jobs that are needed on the Island . The more work that comes to the Island the more jobs that will be created . Both in Cowes and East Cowes