Lendy Ladies’ Day 2018 is a fantastic opportunity to celebrate hundreds of the country’s greatest female sailors who make Lendy Cowes Week such a world-renowned regatta. 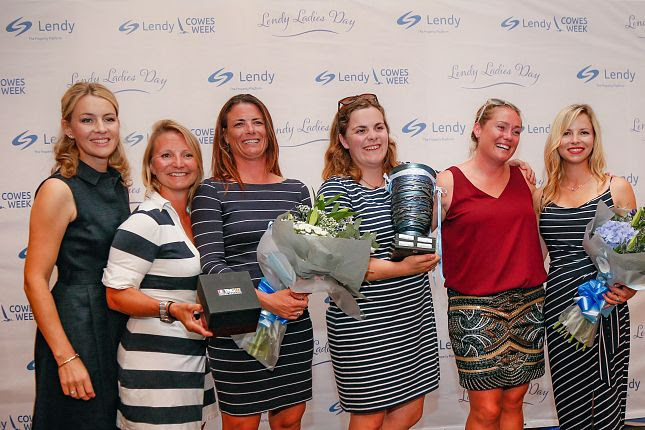 The annual Ladies Day returned to Lendy Cowes Week on Tuesday 7th August, this year supported by Title Sponsor Lendy, with a number of celebrations culminating in the announcement that Tracy Edwards was the winner of the Ladies Day Trophy at an exclusive evening reception held at Northwood House.

The trophy was introduced for the first time in 2006 to champion the role of women in sailing and the sheer number of female competitors racing at Lendy Cowes Week. There are some 8,000 competitors taking part in the regatta this year and around a third of them are female.

Rescue mission
In 2016 Tracy worked tirelessly to rescue Maiden and bring her back to the UK; after the extensive refit Maiden will inspire another generation through a huge global campaign to raise awareness and fundraise for access to education for girls denied this basic human right.

Following a rigorous crew selection process, four amazing young women with many thousands of miles of sailing experience will become the permanent members of the new Maiden crew.

Tracy has been here in Cowes making the announcement of their names and roles. The new Maiden crew will then begin readying the boat for her departure from the Southampton Boat Show in September 2018 for the beginning of her three-year world tour.

Just the start of our journey
Tracy was unable to attend the reception, but newly announced members of her crew who were attending the reception accepted the trophy on her behalf. Commenting on the win, Amelia Ralphs said,

“Unfortunately Tracy couldn’t be here this evening to accept the award but we are absolutely honoured to be here accepting it on her behalf. It is just the start of our journey with the Maiden Factor and, again it is such an honour to be considered against all the other nominees this year and also to have been awarded the Ladies Day Trophy.

“It has been a great day for us. We launched Maiden yesterday and the rig is now in, so it is superb.”

“We’ve enjoyed a fantastic evening and we were absolutely delighted to announce Tracy as this year’s winner. She is a shining example of what women can achieve. Tracy has such a supportive and inclusive attitude and is an inspiration to many women here at Lendy Cowes Week. She embodies the spirit that underpins Lendy Ladies Day and is a thoroughly deserving winner.

“All our congratulations to her. I’m very encouraged by the increasing levels of female participation and enthusiasm for the regatta, in particular women taking the helm during races, with 103 female helms taking part, an over 50% increase on last year.”

Celebrating in style
On the shore Lendy Ladies Day at Lendy Cowes Week was celebrated in style. Women showed their support for Ladies Day by wearing traditional seafaring navy-and-white stripes and enjoying many generous sponsor giveaways both on and off the water.

“Lendy Ladies Day 2018 is a fantastic opportunity to celebrate hundreds of the country’s greatest female sailors who make Lendy Cowes Week such a world-renowned regatta. Lendy is absolutely thrilled to sponsor the day this year, in recognition of the outstanding contribution, commitment and achievement of women in sailing.

“The evening reception was a stunning affair, with the traditional nautical stripe very much in evidence. The turnout to honour some of the most amazing female sailors was incredible, particularly as it is 2018, and the year that promotes female activism and empowerment.”