Head to Ventnor to see the amazingly detailed three-storey mural of the ‘Ventnor Giant’, the tallest piece of street art on the Isle of Wight. It was commissioned by Ventnor Exchange and created by world-renowned street artist, Phlegm. 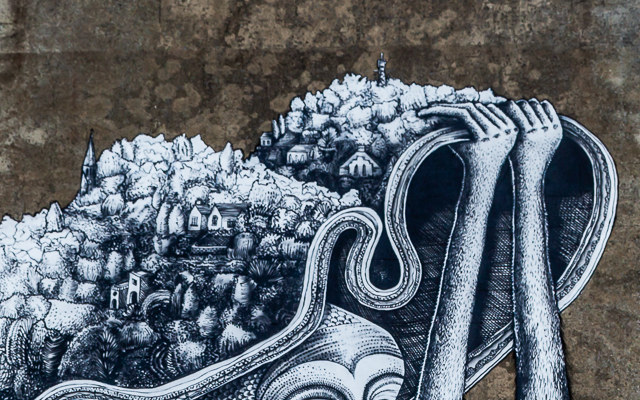 Anyone travelling in and out of Ventnor over the last five days will have seen something magnificent developing on the side of a three-story building on the High Street.

Based on a thumb nail sketch, an enormous mural has been evolving and last night (Monday) was completed, just in time for the launch of the Ventnor Fringe Festival today.

Video trailer
This sneaky peek footage of the mural being created was filmed and produced by the guys over at Glass House Productions.

It’s a great little teaser that should work brilliantly on social media to draw visitors to the town.

Lifting the Lid on Island Culture
The Ventnor Giant was designed and created by world-renowned street artist, Phlegm.

Based in London, but hailing from Sheffield, Phlegm was commissioned by Ventnor Exchange as part of the Lift the Lid project (read more about it here).

Wearing the Ventnor cloak
As you can see, the mural depicts one of the artist’s famous characters holding the town of Ventnor on its back. If you look carefully down to the right-hand side of the mural, you’ll spot The Needles by its feet, and to the bottom left, you’ll see “Britannia’s” beach boatshed on stilts. Those who know the town well, will be able to recognise many of the buildings and landscapes which inspired the work whilst the artist was creating it from the top of a ‘cherry picker’.

Phlegm told OnTheWight that he doesn’t usually sketch a mural out on paper beforehand, but for this job he did, and it was tiny! Ventnor Fringe
Ventnor Fringe Festival launches today and will host over 70 different shows, as well as 100s of performances within the Free Fringe in various locations throughout the town. Jack Whitewood, Director of the Ventnor Exchange which organises the Fringe said,

“The Fringe has been transforming underused spaces around the town ever since we started back in 2010. Every year the ambition grows and the number and caliber or artists making the journey to Ventnor continues to rise.

“It’s amazing seeing the town come to life and the creations of the festival gradually spilling into year round creative activity.”

Permission granted
As permission was given by the landlord of the building and the Isle of Wight council’s planning department confirmed to the Exchange that planning permission was not needed, we’re sure this fabulous mural will last a lot longer than the Banksy I Love You piece that was removed by the IWC in 2010.

Where to find it
Mousover the map below to see the location of the mural. You can find it on the main High Street as you enter the town centre from Shanklin direction.

A free guided walk around an Arts Trail leaves from Ventnor Harbour at midday every day of the Fringe.