The mystery is solved of why we on the Isle of Wight could hear (well before we could see) powerboats thundering past the Island today.

The deep growl of a seriously-powered engine rumbled into earshot this morning in Ventnor, causing some confusion at OnTheWight towers – because despite the noise, there was nothing to be seen.

After looking out of the window at the sea (well as much as you could see through the fog), a P1-style powerboat eventually came into view pounding over the waves, heading West.

A word to the wise
Given the conditions and the speed of the thing, we wondered out loud (on Twitter and Facebook) what was going on.

A bit of searching later and some back and forth with Simon of Wave105, the answer materialised.

Venture Cup Prologue
The Venture Cup Prologue was underway. Effectively a ‘warm-up’ few days for the main race – 2,500 miles over two weeks – that bills itself as “The world’s longest, toughest & most prestigious powerboat race”.

Today’s leg, the final, left from Guernsey, raced up to the Nab Tower, took a left, hooked around the south of the Isle of Wight, bearing left at the Needles, crossing the finishing line just off Bournemouth Pier. 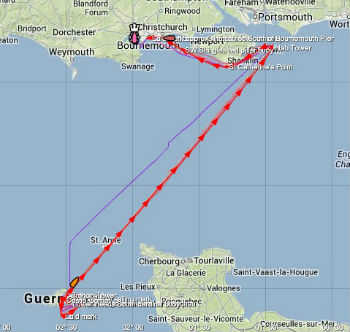 Power + Speed
Some of these beasts are equipped with engines that output 1,400+BHP and averaged over 50 Knots over the course.

They’re currently at rest in Poole harbour and we suspect, probably having a pit of a party.

Live map
You can have a look at the route they took on the live tracking page of their site.

Would have loved to have seen that…did anyone get pics?

Fog wouldn’t allow pics from the Island today, but lots up on their gallery of other legs – very shiny!

Hard to think of a more pointless waste of fuel or futile reason to pollute the Earth, still the 1% have to squander their ill gotten gains on something.

You’re not really expecting anyone to take that seriously are you, Broom?

Vote Up00Vote Down
davimel
THANK YOU!! Here in Upper Ventnor I wondered what the noise was… I decided that either someone was having a marathon strim session with a V8 powered Flymo, or that we were being invaded by genetically modified wasps!! The noise was fabulous (to a petrol head like me) and I just wish I had popped onto the Downs where all would have been revealed! Silly that we… Read more »
Vote Up00Vote Down
Billy

Great description of the sound of the first two powerboats.1 and 2 boats both running 7.4 Litre Ilmor American engines.To us petrol heads it was pure heaven listening to those big block engines sreaming as the boats hit St.Catherines tidal race.Agree about lack of posters advertising the event.

Vote Up00Vote Down
Joseph Moore
Not my favoured area of boat racing (I prefer sail), but I think that’s a little high – a quick google suggests that in 2006 the 2000bhp Kerakoll used around 110 gallons per hour at full chat, and when racing it’s not a case of running full out all the time as sea conditions may not allow it. Still a lot of diesel being burned, granted, but… Read more »
Vote Up00Vote Down
Bystander

unsure whether those figures are per engine??

“At full bazooka Kerakoll consumes diesel at a rate of 500
litres per hour. That’s about half-a-mile per gallon.”

I would assume from they’re referring to the boat as a whole, all engines combined.

Vote Up00Vote Down
Bystander
Well for arguments sake we will call it at least 500 litres, or 110 imperial gallons, per hour per boat for 2,500 mile (plus the preliminaries like this of course) What a relief it carbon neutral eh? think of the environmental damage otherwise. It must be nice to have so much money you can just buy your way out of any responsibility along with access to rich… Read more »
Vote Up00Vote Down
Billy

Allways remember the start of Cowes-Torquay-Cowes in the 1980s.Diesel boats would leave a huge black soot trail on the water.Petrol engines far cleaner and you can hear them coming!