Vote for Isle of Wight Pride in the Boyz Magazine Awards

Your vote counts. Show your support for Isle of Wight Pride, which has been shortlisted in the 2018 Boyz Magazine Awards for best Pride. 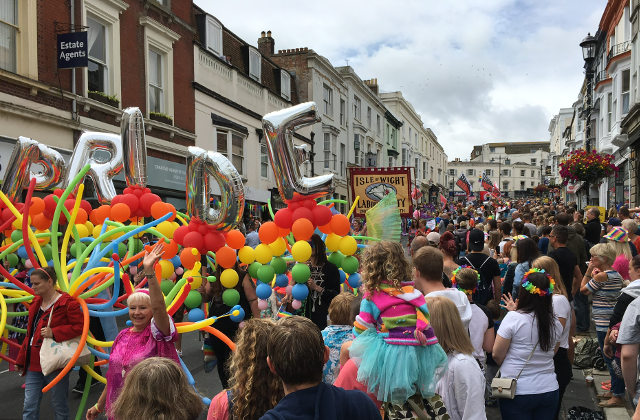 Isle of Wight Pride needs your vote. They have been shortlisted for an award and voting closes in just under three weeks.

The Island’s very own Pride – which is the only one in the country to take place down on the beach – has been shortlisted in the Best Pride or Festival category of the Boyz Magazine Awards.

Isle of Wight Pride was launched in 2017 and for this year, after battling it out against a strong opposition, came out on top to host UK Pride (21st July).

Cast your vote
Voting for the Boyz Magazine awards closes at midnight on Tuesday 13th February and the winners will be announced at a special party a week later, during a glittering awards ceremony hosted by Myra DuBois and Lola Lasagne.

Pop over to the Website to cast your vote for Isle of Wight Pride (jump down to category 9).

They’re up against some stiff competition, so share this far and wide.

You’ll need to give your name, postcode and email address to validate your vote, but Boyz Magazine say your email address will only be used for validation purposes and will not be used for marketing purposes or shared with anyone.

Best of luck to the Isle of Wight Pride Team.