Dagmar was brought round from the general anaesthetic and asked to play the violin, so the neurosurgeon could remove the tumour without affecting the Islander’s violin-playing brain function 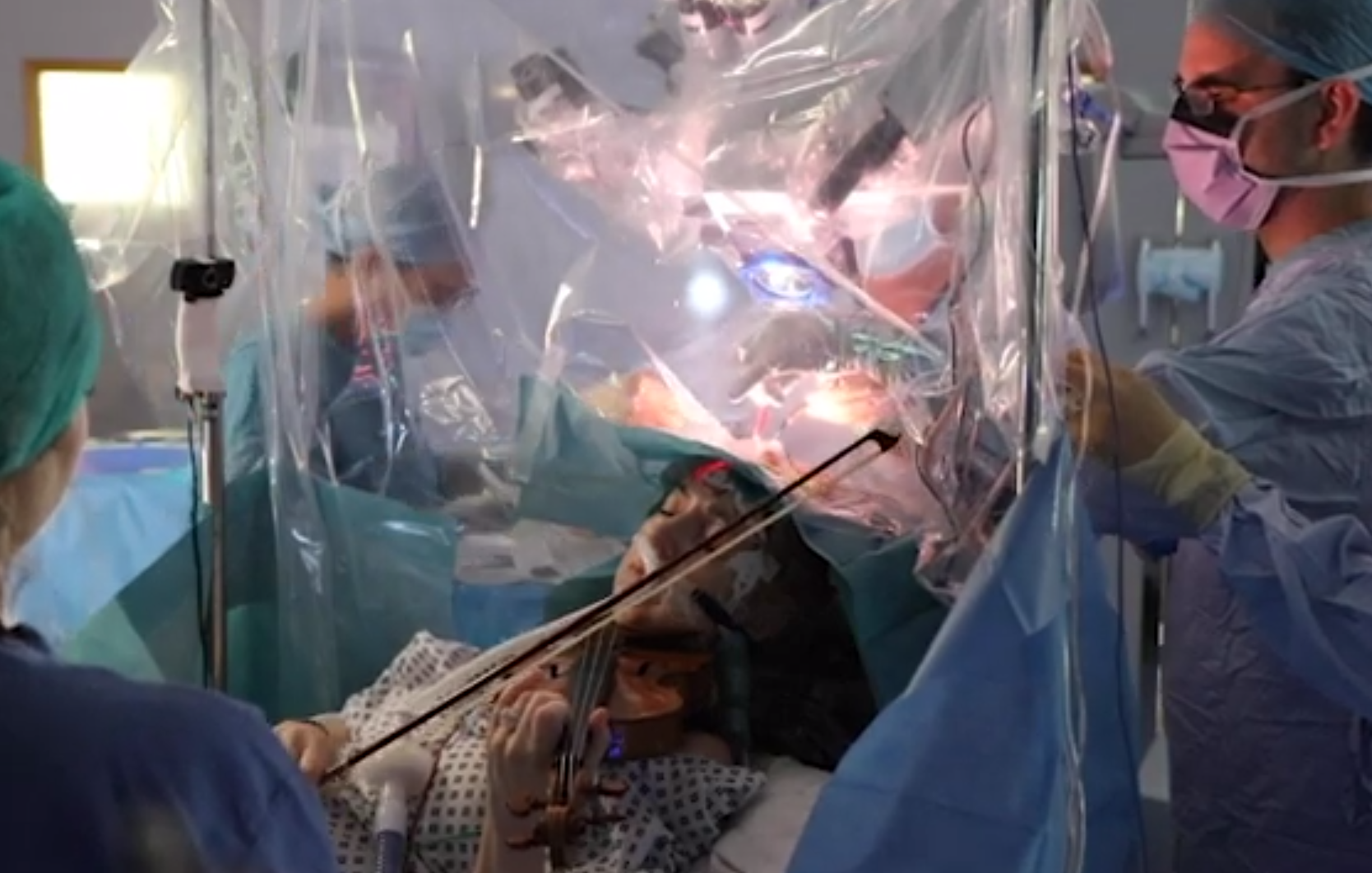 A former management consultant from the Isle of Wight, has made history by playing the violin while surgeons at King’s College Hospital in London removed a tumour from her brain.

Dagmar Turner was diagnosed seven years ago with a large grade 2 (slow growing) glioma after suffering a seizure during a symphony.

The committed violinist, who plays in Isle of Wight Symphony Orchestra and various choral societies, underwent biopsy and then radiotherapy at her local specialist hospital to keep the tumour at bay.

When it became apparent in autumn 2019 that the tumour had grown and become more aggressive Dagmar, who has a 13-year-old son, was keen for surgery to remove it.

Dagmar’s tumour was located in the right frontal lobe of her brain, close to an area that controls the fine movement of her left hand. Precise and skilled use of this hand is essential for playing the violin as the fingers regulate the length of the strings by holding them against the fingerboard, producing different pitches. Dagmar explained her love of the violin and was aware of Prof Ashkan’s mutual passion for music. The brain tumour specialist holds a degree in music and is an accomplished pianist.

Devising the plan
After explaining concerns she had over losing the ability to play the violin, Prof Ashkan and the neurosurgical team at King’s devised a plan. Prior to Dagmar’s operation they spent two hours carefully mapping her brain to identify areas that were active when she played the violin and those responsible for controlling language and movement.

They also discussed with Dagmar the idea of waking her mid-procedure so she could play. This would ensure the surgeons did not damage any crucial areas of the brain that controlled Dagmar’s delicate hand movements specifically when playing the instrument. With her agreement, a team of surgeons, anaesthetists and therapists went on to meticulously plan the procedure.

She played violin while her tumour was removed, while closely monitored by the anaesthetists and a therapist.

“King’s is one of the largest brain tumour centres in the UK. We perform around 400 resections (tumour removals) each year, which often involves rousing patients to carry out language tests, but this was the first time I’ve had a patient play an instrument.

“We knew how important the violin is to Dagmar so it was vital that we preserved function in the delicate areas of her brain that allowed her to play. We managed to remove over 90 percent of the tumour, including all the areas suspicious of aggressive activity, while retaining full function in her left hand.”

Playing the violin since the age of 10
Dagmar added,

“The violin is my passion; I’ve been playing since I was 10 years old. The thought of losing my ability to play was heartbreaking but, being a musician himself, Prof Ashkan understood my concerns.

“He and the team at King’s went out of their way to plan the operation – from mapping my brain to planning the position I needed to be in to play.

“Thanks to them I’m hoping to be back with my orchestra very soon.”

Three days after the procedure Dagmar was well enough to go home to her husband and son. She will continue to be monitored at St Mary’s hospital.

All at OnTheWight would like to wish Dagmar a swift recovery.

1 Comment on "Watch: Isle of Wight woman woken from brain surgery and asked to play violin while tumour removed"

newest oldest most voted
Jonathan
Wow! How extraordinary is that? A wonderful story, and I wish Dagmar a complete recovery, and hope to see her taking up her rightful place in the orchestra again as soon as possible. I confess I did have a surreal moment while reading this, imagining an IWSO concert mid-operation, with the surgeons and staff remaining considerately silent during the quiet moments. I look forward to hearing your… Read more »
Vote Up200Vote Down