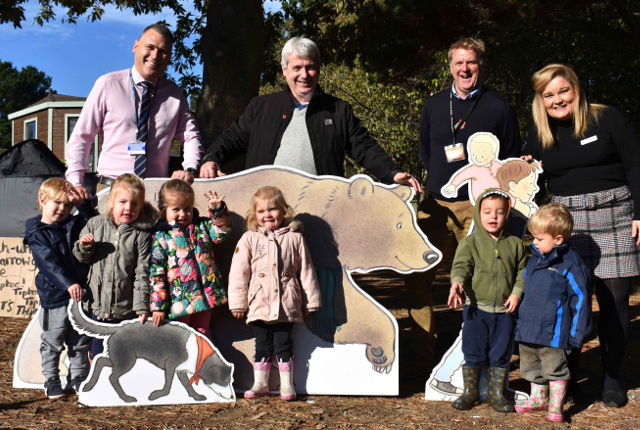 Simon shares this latest news on behalf of Visit Isle of Wight. Ed

They’ve delighted families visiting the Isle of Wight since Easter, but as winter draws closer, the characters from the ‘We’re Going On An Isle of Wight Bear Hunt’ promotion have found two ‘forever homes’ to spend the rest of their days.

Visit Isle of Wight and Wightlink have donated the cut-out characters Stan, Katie, Rosie, Max, the baby, Rufus the dog and, of course, the bear to the YMCA Fairthorne Group children’s nurseries on the Isle of Wight.

Entertaining throughout the summer
The beautifully drawn characters, as seen on Channel 4, and based on the best-selling original children’s picture book have entertained thousands on board Wightlink ferries and at locations on the Isle of Wight throughout the summer of 2018.

Rather than dispose of the cut-outs, Wightlink and Visit Isle of Wight have teamed up to donate them to two children’s nurseries on the Island.

They are now set to entertain and help with the education of young children.

Bishop: “Can’t think of a better home”
Sharlotte Bishop is the nursery manager of the Newport YMCA nursery:

“The children absolutely love the story and these characters just give it a whole new level for their imagination, it flourishes their learning. Early literary skills are so important and I can’t think of a better forever home for these characters than our garden.

“Our garden is absolutely huge and we use it to our best advantage. Children learn better when they’re outside, they’re comfortable and in the fresh air, and that’s exactly what we deliver across our YMCA nurseries on the Island.”

“A huge thank you to Wightlink and Visit Isle of Wight for these cut-outs, they’re just superb.

“The children already have the story within the nursery and they know it quite well, so this just enhances that, so they can understand the story from the book and then play role play and live it.

“It’s a great example of a partnership, that they [Wightlink and Visit Isle of Wight] are thinking about the Isle of Wight community and the children of the Island and the more that we can do this, it’s great having that collaboration with industry on the Island.”

“We have been really pleased to support Visit isle of Wight with the promotion of its Bear Hunt Adventures this year. It is such a classic story and one that so many children (and parents) are very fond of and I’m sure the children will really enjoy having these extra decorations to help bring an extra dimension to their storytime!”

Myles: “Huge thanks to Wightlink and the YMCA”
Will Myles, managing director at Visit Isle of Wight said he was glad that the characters from the book would have somewhere permanent to live on the Island and continue bringing joy to children:

“We’re Going on A Bear Hunt has been on the Island since Easter, and their last event was at the Youth Zone at the Isle of Wight Literary Festival. They will live on the Island for some time to come with the YMCA nurseries. It’s a huge thanks to Wightlink and the YMCA for looking after them for us.”

Will also congratulated the YMCA team for the effort they had put in to bringing the book to life at the nursery:

“It’s absolutely amazing, they’re actually living and breathing the story and the team here are bringing it to life for them, so well done.”