Wightlink have been in touch with details of the latest review of their Wight Class ferries that are being used on the Lymington River. 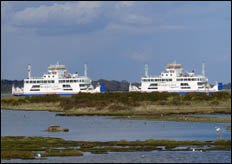 An independent “Review of Wight Class Ferry Operations and Marine Safety” carried out by BMT Isis found, “”¦that the low level of marine risk on the Lymington River had not been compromised by the introduction of the W-Class ferries.”

Research was undertaken at various dates including during the 2010 high season for both recreational sailing and Lymington to Yarmouth ferry passages.

Wightlink tell us that they were pleased to note that the review says that the “overall impression was of a river fraternity that has settled down with both yachtsmen and ferries successfully coexisting and using the river sensibly and safely.”

They confirm they’ll be taking on board the recommendations from the report adding, “There is no room for complacency in the maintenance and improvement of marine safety. However, this independent review clearly shows that Lymington River Association allegations about Wight Class ferry safety issues and problems are without foundation.”

Image: Peter Curbishley under CC BY 2.0

Funny how efficient they are when the news is in their favour. The rest of the time, they’ll useless at telling customers anything.

I am no fan of Wightlink but I’m glad that the opposition from the yachties in Lymington has been dismissed. I have watched the wash from the new ferries hit the mudbanks and I don’t see any difference from the old ones.