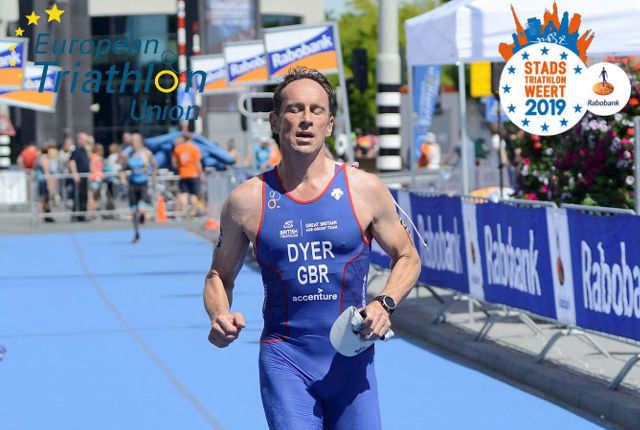 Both Steve and Glyn have represented Team GB several times now but probably experienced one of the event’s toughest races.

Onto the bike to take on a tough two lap hilly 40km route along the lake was ideal for Stuart whose strength from his middle distance training helped him make up several places on the bike to enter T2 in 59th position with a solid 1:11:22 split for this hard course. Glyn was finding it harder and lost a few places and completed the bike in 1:22:25, now in 26th position.

Both had another fantastic experience representing Team GB and would like to thank the IW Council and Wightlink for their continued support.

The first to take place was the Aquabike at the Duver, St Helens with water safety cover provided by X-Isle Sports Bembridge. The choice of one, two or three laps of a 250m swim, followed by either an 8km or 13.5km cycle into St Helens, and around Bembridge.

The Nominated winners all choose the longer swim and cycle course and all were extremely accurate in their estimated times. First was Sean Williams in 36:55, only five seconds inside his nominated time. Second was Steve Dines, nine seconds inside his nominated time of 44:45, with John Gardner only 11 seconds difference, completing the course in 44:49.

The final event was the Aquathlon, held at Dunroamin Beach in Lake, with water cover provided by Wight Water.

A similar format of one, two and three laps of 250m swim followed by one or two laps of a flat 2.5km run to the pier and back.

There were several fast performances with Craig Wilson3(24:18), Sean Williams (34:36) and George Johnson (34:52) all racing for the quickest time. However, with Craig leading out of the swim, he was strong enough to hold off the fast pace of both Sean and George. Nina French swam and run superbly well to be the fastest female in 38:12.

The winner was Steve Dines who managed to score only seven points from the three best nominated timed events.

Second was Kaitlin Wilson with 14 points and third, Trevor McAlister with 18 points.

Report shared by Liz on behalf of Wight Tri. Ed