Great effort from Wight Tri member, Jack Elton-Walters when he took part in the London Triathlon for the fifth time. 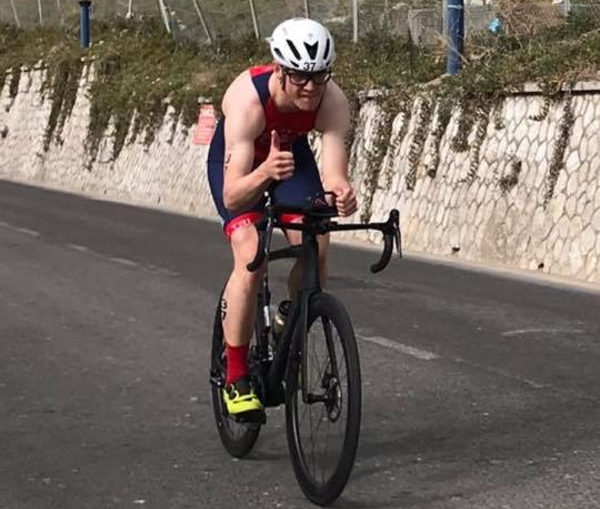 On Sunday 28th July, Wight Tri member Jack Elton-Walters returned to the London Triathlon for the fifth time, this year more as a participant than a competitor with no friends in attendance to race against and with his season’s key target, the Island Games, completed a few weeks back.

After concentrating on cycling for the previous weekend’s mountainous Etape du Tour in France, the London Triathlon was only the second time he’d swam since the Island Games almost a month before and so the relatively slow swim time of 31:30 was reasonable and not a surprise.

Longer transitions
London’s transitions are longer than most races as participants are obliged to remove their wetsuits on the dockside before heading up a steep set of stairs to the transition area.

Out on the bike, a stiff headwind on the the outward half of each of the two laps slowed everyone’s times (and the opposing tailwind never seems to make up for it!) but riding a road bike with clip-on bars rather than a full TT rig as last year, Elton-Walters finished the bike with a time of 1:04:44 for the 40km route on the closed roads of Central London between the ExCel and Westminster.

Congested laps
Out on the run and negotiating the congested and narrow four laps, most of the 10km route was covered at a fair pace – except for a severe stitch from 8-8.5km – and a strong sprint over the final 400 metres or so gave a run time of 43:11 and a total time of 2:25:30.

Plenty of room for improvements, but a fair overall time after taking a more relaxed approach to the event compared to previous years, in particular as it comes after 2019’s ‘A race’.