“We need to keep that engineering heritage”, “We can buy this and keep this site for the Island”, “It is our decision, we will own it and we will take responsibility for it” and “we will keep a really good reputation for being business-friendly” are just some of the comments by councillors discussing the purchase of Venture Quays 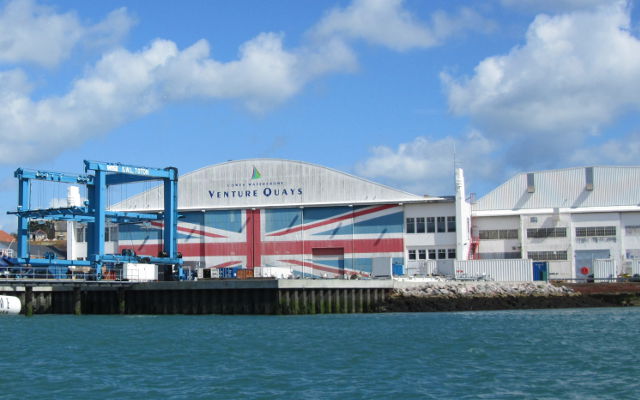 “It would be an absolute tragedy if the purchase of Venture Quays by the Isle of Wight Council did not go ahead.”

That was the message to councillors who were urged to continue with buying the landmark East Cowes site.

The Isle of Wight Council has been in talks with Homes England for the last 18 months to try and buy Venture Quays and other associated land parcels, for £1 million.

Risks in ‘new economic climate’
However, due to the current financial situation after the Coronavirus pandemic, a report going to cabinet today (Thursday), asks whether the council should take on the risk of the waterfront site.

In the report, the risks of acquiring the site and considerations the council must take are laid out — including the ‘new economic climate’, a potential but ‘likely’ recession lasting one to three years and implementing a delivery strategy.

“Given the overall financial position of the council and the need to maintain an adequate degree of financial resilience to continue to deliver critical and essential services through the pandemic, it is important that there is reasonable surety that the acquisition of Venture Quays does not place an ongoing financial burden on the council and that the council is adequately protected against financial risk.”

£300,000 of building work needed
Along with buying the land, building work will need to be done, costing an estimated £300,000, as well as terms and conditions set by Homes England to build houses that would need to implemented by 2024 — otherwise the site could be bought back for £1.

Hollis: “Would be an absolute tragedy if this does not go ahead”
Cllr Richard Hollis said the planned Red Funnel terminal upgrade had yet to be built, but what remained of the site was so valuable to the boat building industry.

“It would be an absolute tragedy if this does not go ahead. Not only for the potential business rates and the investments but the people and the jobs who are contributing hugely to the Island.

“It is an absolute no brainer. Whatever we do, we must carry this through.”

Protecting IWC’s reputation
Cllr Chris Quirk said this was the last of the really serious shipbuilding sites on the Island and it was imperative it remained.

“If we keep it, we will keep a really good reputation for being business-friendly on the Island, with the possibility of bringing other developers back.

“The proposal for houses is on quite a large site that won’t affect the boat building at all. This is a site that has great potential.

“We need affordable housing but it is best that is mixed in with commercial housing because then you don’t get ghettos.”

Lilley: “Need to keep that engineering heritage”
Cllr Michael Lilley said he supported the acquisition of the iconic site and providing affordable housing.

“We do need to keep that engineering heritage.

“We are very reliant on the tourism industry, we forget we were one of the great aeroplane and boat builders in world standard, and still operating.”

Stewart: Officers are being rightly cautious
Part of the council’s plans would be to provide another housing development in East Cowes, on land on Albany Road and Marsefield Road.
Council leader, Dave Stewart, said he has a positive outlook on the acquisition of the site, but was mindful of advice given by council officers.

“It is an interesting venue and employs at least 150, and that is 150 families, and it will be an asset acquisition.

“Certainly, we are mindful of what our officers say and they are being rightly cautious.

“What is important is that we understand the benefits, the potential of the investment which I know many people have encouraged us to do on the Island.

“Any investment we do, we have to be very aware of what the implications are.

“Personally, I am very encouraged by the work that has gone in and the potential of this particular opportunity.

“It is our decision, we will own it and we will take responsibility for it.”

Hutchinson: We should do our damndest to grab opportunities
Cabinet member for finances, Cllr Stuart Hutchinson also put his support behind buying the site, saying land is a good acquisition for the council.

“I think it is essential, even though we are desperately financially constrained. Opportunities do arise and when they do we should do our damndest to grab them.

“Unless we seriously consider purchasing the site, we will lose the opportunity.”

Whittle: “Keep this site for the Island”
Cllr Wayne Whittle, cabinet member of regeneration, said the council had missed out before on the Venture Quays site and it ended up being a big project that didn’t happen. He said,

“Subject to a good lease, we can buy this and keep this site for the Island.

“We have to balance this against the financial climate and the position of the council but we can purchase this to retain those jobs so we will do all we can to get this site for the island.”

3 Comments on "£1.3m purchase of Venture Quays by Isle of Wight council scrutinised"

We don’t need ‘affordable housing’, which simply means housing the rich can afford. We need social housing, for those, who because of low island wages, will never be able to afford housing..

Vote Up190Vote Down
Colin
Homes England is a quasi-government department and exists to facilitate the provision of land on which to build houses. From it’s own website the aims include “increasing the number of new homes that are built in England, including affordable homes and homes for market, sale or rent -improving existing affordable homes and bringing empty homes back into use as affordable housing -increasing the supply of public land… Read more »
Vote Up18-1Vote Down
melting

I agree with Tony-what does affordable housing mean? there is no way the low paid people can afford to buy. There ought to be more “council” houses built to be let for a reasonable rent.