Crowdfunder: Be part of Steampunk Webseries

The Last Airship Steampunk Webseries will tell the story of Lupo and Volpa, as they attempt to prove that airships can compete with high powered steamships when crossing the Atlantic. 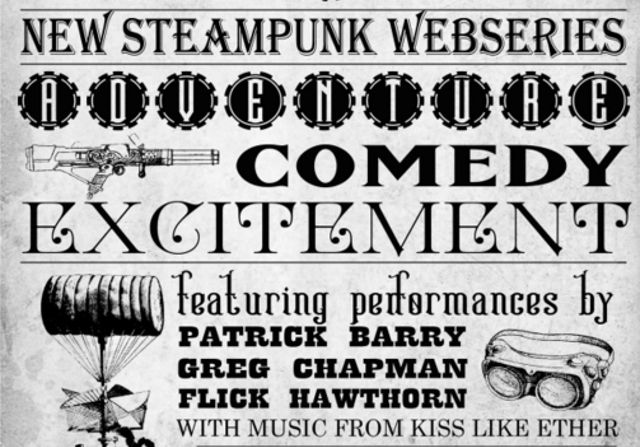 Writer and performer of the brilliant Condensed Histories Webseries and shows, Greg Chapman, is half way through a Steampunk crowd-funding project.

Along with support from Patrick Barry, Felicity Hawthorn and Steampunk band ‘Kiss Like Ether’ he plans to create a Steampunk comedy-adventure Webseries called ‘The Last Airship’.

It tells the story of Lupo and Volpa, as they attempt to prove that airships can compete with high powered steamships when crossing the Atlantic, in an attempt to keep the age of dirigible travel alive.

There are 14 days left to raise the target of £1,050 and Greg is about half-way there already.

What’s the money for?
Greg explains,

The money from our initial goal will be going into three main places, camera, greenscreen and studio space. While I have certain equipment which I have used to film my Condensed Histories Webseries over a number of years, this equipment is getting old, and lacks the image quality and definition which I see needed for a Webseries of this nature.

With a lot of editing and effects work needed, we need a better quality of camcorder and a larger greenscreen, as well as hiring a space to set these up in.

While £1,050 may sound a lot, this is nothing in the world of budgets for a series, but we are going to be shooting inexpensively while keeping the production values as high as possible, which is why currently the plan is to shoot almost entirely on greenscreen with a combination of miniature and CGI sets, and a few location shoots.

If you’d like to support this appeal, head over to IndieGoGo to find out more