After contracting Bacterial Meningitis in 2018, Ben was feeling pretty lost, but this Young Entrepreneurs programme has given him the confidence to believe in himself and what he can achieve. The Award sounds well-deserved. 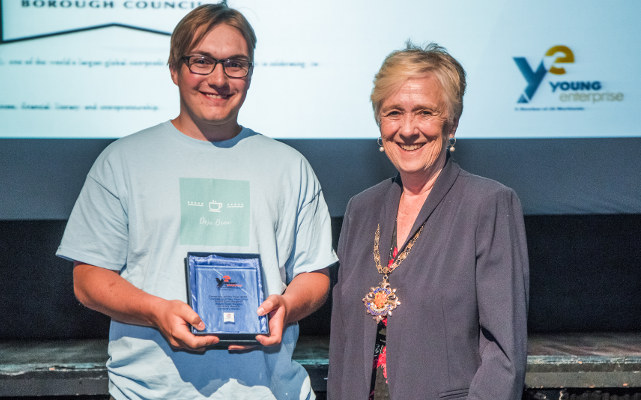 The award is presented to the student in Young Enterprise’s Company Programme, who has made the most transformational journey this year and the 2019 winner was Ben Taylor, a student at Ryde Academy, Isle of Wight.

The South East Region Awards were held at the HG Wells Centre, Woking on 5th June and ten teams from schools from Hampshire, Isle of Wight, Kent, Surrey, Sussex and the Channel Islands took part.

He was nominated by his teacher who could see how Ben had personally changed by taking part in a team project, working to deadlines and financial constraints and making contacts outside the school environment.

Ben: “Learnt to believe in myself “
Ben said,

“I am delighted to have won this award and am very grateful to my teachers and supporters such as my family, my friends, Miss Bell, Mrs Clarke, Miss Muncaster and my Business Adviser, Mr Loake, who gave us all great support and advice over the past ten months.

“I have learnt so many things, mainly to believe in myself and what I can achieve when I put my mind to it.  I am much more confident although standing on stage and speaking to an audience in public was pretty nerve wracking, I pushed through and did the best I could. “

“At the start of the Young Enterprise Programme in September I didn’t know what benefits I would get from it and I was completely unmotivated and lost having contracted Bacterial Meningitis in 2018, but this programme brought it all back to me and I strongly encourage ANYONE who has the opportunity to take part in the Young Enterprise programme to do it.

“It really is a once in a lifetime opportunity that has to be seized.”