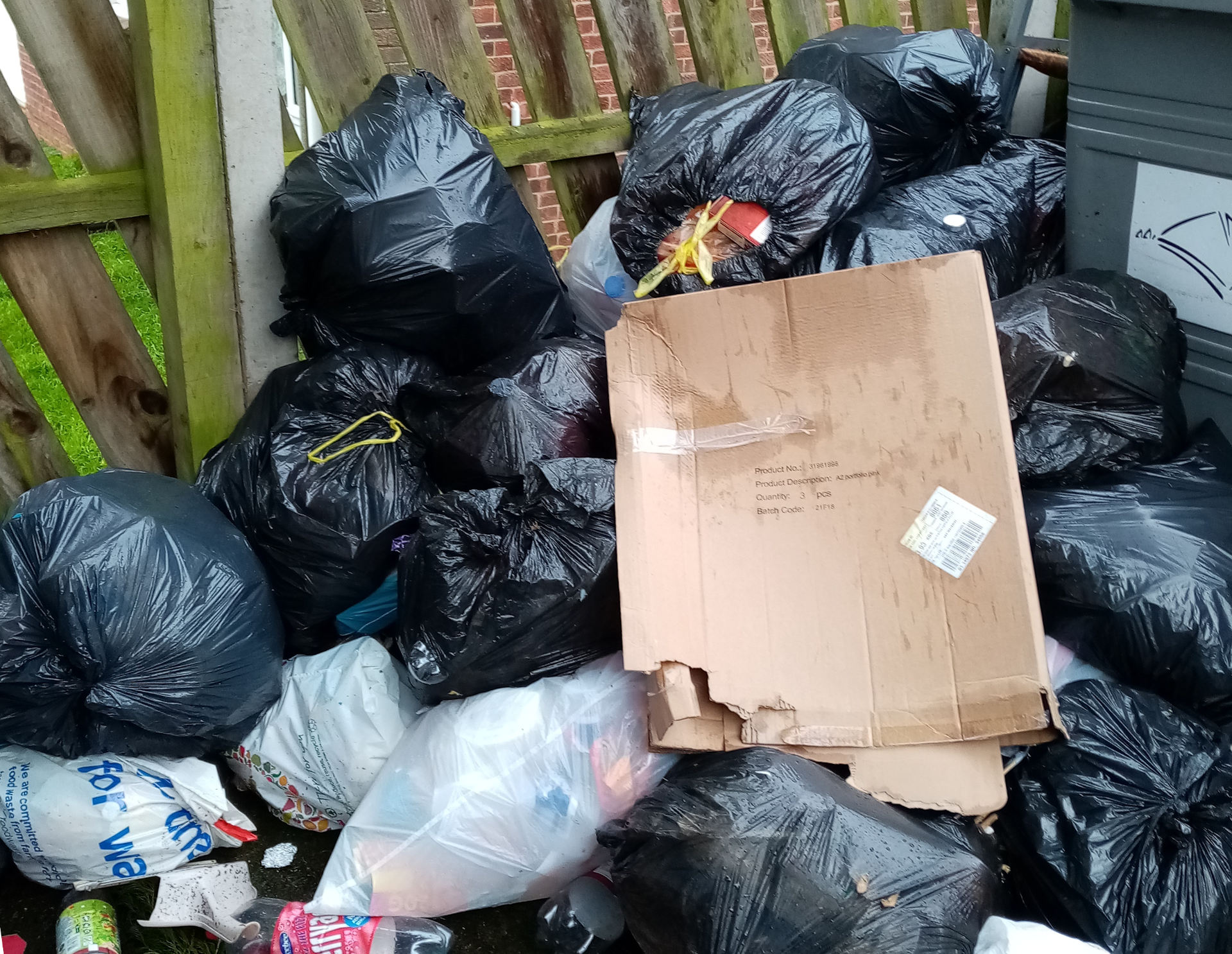 Bin crews in Ryde are under fire from residents who caught them on camera allegedly flinging around rubbish and not taking it away.

Tenants in a block of flats on Slade Road in Oakfield said they were fed up with bin men who were ‘launching’ the bin sacks around.

However, the Isle of Wight Council, which manages the Amey refuse contractors, said the bin men were moving excess rubbish into a corner.

Rubbish piling up
With a refuse collection done two days before Christmas but not again until the second week of January, residents found rubbish was piling up and has continued to do so.

Andy Tyler, who lives in the flats and filmed the binmen at work, said the communal bins were filling up because a lot of people use them and there is no recycling option.

“After Christmas, we obviously had a lot of stuff but the bin men did not take it.

“From then, the rubbish hasn’t gone down and instead they launch it around causing the bags to split.

“It is a horrible state of affairs because someone else has to clean up the mess they have made and we are fed up with it.”

Limit to black bin waste
The Isle of Wight Council does have a strict rule of only taking black bags of rubbish that are in the bin. But the video Mr Tyler took shows the Amey bin crew, employed by the council, throwing the left-over rubbish around and piling it up in a corner.

The council said to support and encourage recycling it has has introduced a limit on the amount of black bag waste that will be taken from households and stop collecting excess black bags left to the side of bins and communal bin stores.

IWC: Crews moving sacks out of the way
An Isle of Wight Council spokesperson said:

“The collection of waste from the bin store in the flats in Ryde has been investigated, as have the actions of the waste collection crew in moving the excess waste to the corner of the bin store.

“On this occasion it is clear the crew were moving the sacks out of the way of the communal bins to be able to empty them, and were picking up the excess sacks outside the bin store to place them inside.

“More care could have been taken in the way the sacks were moved for which we apologise, however the staff are correct not to take them as these sacks were not in the containers and considered to be excess waste.

“Our waste services team is reviewing the bin store to ensure adequate recycling containers are provided for the residents as either communal bins or reusable sacks for the individual flats.”

newest oldest most voted
Colin
This demonstrates yet again the inflexibility and indifference of the IWC and Amey. I tried for months to get lockable bins in a similar situation as the general public were dumping their rubbish in communal bins at our flats in Ryde and leaving their bags in the general area when full. We also were not supplied with recycling faclities so everything went into the rubbish collection. The… Read more »
Vote Up34-6Vote Down
Benny C
Sadly more rubbish PR from IOWC. Sorry, couldn’t resist that. Seriously, just say things in the right way and stop making things worse! How about – Yep, they were right to move them but the helpful video has been used to educate our contractors to behave properly. Thank you Ryde residents for helping us manage your service better. Tell us if it happens again. Amey have apologised… Read more »
Vote Up17-5Vote Down
laurentian

What it is to be hopeful – I wish you luck!

Who on earth votes down this stuff? Public services are exactly that, services. A video showing misdemeanours needs dealing with. Why tolerate infantile behaviour like that? If people don’t like or want to do the job, we shouldn’t condone them taking it out on the customers.

Vote Up1-3Vote Down
Paul Cheverton
The rules state that only rubbish in bins will be taken. It is the same for everyone, the flats here should either rent a further bin or organise a run to the tip. All I can see here is two workmen doing a job many of us wouldn’t want to do, clearing dumped rubbish that has been left there for weeks y the lazy residents in order… Read more »
Vote Up5-7Vote Down
Colin
@ Paul. You can’t rent another bin. You have to have what you are given. The council/Amey decide what they think you are entitled to That’s the rules too. People other than those entitled to use those bins dump their rubbish there. It happens in many places where there are communal bins. I haven’t criticised the binmen, they are only following their orders from those on high… Read more »
Vote Up80Vote Down
temperance