The August bank holiday weekend brings with it a chance to meet eight of the most talented and highly-accomplished artists on the Isle of Wight, in the wonderful depths of beautiful St Lawrence. 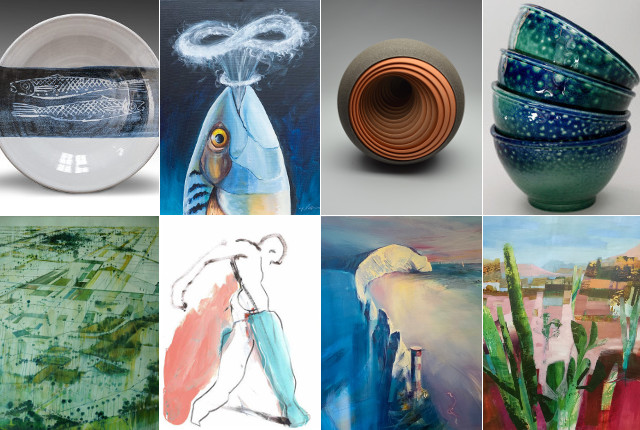 There aren’t many places that can offer an ‘effortless cool’, but Binnel Studios, now fully established at the former site of Isle of Wight Studio Glass, does just that.

Head to St Lawrence over the August bank holiday weekend and you’ll be in for a treat, as eight highly-accomplished artists – some world-renowned – open their studios to the public.

The artists
If you’ve been down to Binnel Studios before, this year’s event will be a great opportunity to see the work – another year on – by artists; Molly Atrill; Phil Capon; Matthew Chambers; Jane Cox; David Firmstone; Petra Lunenburg; Amanda Wheeler and Celia Wilkinson.

As you might expect when there are eight artists involved, a wide range of styles and mediums can be found, appealing to a variety of tastes.

Molly Attrill
Molly Attrill’s pots are designed and made to give pleasure in everyday use at the table.

“I have worked as a potter on the Island for over 35 years. At my present studio at Binnel, near Ventnor, I have found the freedom to develop new pots in the traditions of earthenware slip and maiolica which have always been my area of interest.”

Molly went on to say,

“In the Spring of this year my work was included in an exhibition in Tokyo which traced the influence of Bernard Leach on contemporary potters. It has been a busy year because I am also exhibiting at The Clayden Gallery, Quay Arts, with my sister, during July in a small show titled ‘Potter and Painter’.

Phil Capon
Phil Capon studied art at Portsmouth College of Art under such luminaries as David Hockney and Joseph Losey. After leaving, Phil took up a career as an Art Director for several leading London Advertising Agencies before eventually becoming a partner and Creative Director of his own agency.

During his career as an Art Director, Phil won numerous awards for his work and commissioned many leading photographers, artists, and film directors such as Terry Donovan, Bob Carlos Clarke, Chloe Cheese and Hugh Hudson. He now works out of Binnel Studios.

Matthew Chambers
Award-winning ceramic sculptor, Matthew Chambers trained at the Royal College of Art and his work has been widely exhibited since, with representation by galleries both in the UK and internationally.

His exquisite ceramic works have been purchased for several museum collections, including the V&A in London and the Sèvres museum in Paris.

They are also in the collection of Spanish fashion house, Loewe.

Jane Cox
Jane Cox is a Fellow and former Council member of the Craft Potters Association (CPA) and a Brother and Trustee of the Art Workers Guild (AWG) and last year she was Master of The Art Workers Guild 2018 joining the ranks of renowned former Past Masters Rackham, Lethaby and William Morris.

This year Jane has new role at the Guild. She told OnTheWight,

“I am Chair of Outreach of The Art Workers Guild. This is a challenging five year post involving coordinating a small team running Outreach Projects with many illustrious and interesting institutions such as the V&A, Courtauld Institute, Watts Gallery, Imperial College. Included in our team are writer and critic Tanya Harrod, Textile artist Rachael Matthews.”

Jane’s work features in the permanent collection of the Fitzwilliam Museum, Cambridge and the British Council permanent collection at Aberystwyth University, Wales. She has also exhibited The Victoria & Albert Museum, London Design Museum, Fortnum & Mason and exhibited in France, The Netherlands, USA and Japan.

Jane’s work is collected for its striking surface pattern and bold use of colour.

Recently she has been expanding her glaze colour palette to include new speckle glazes in blue/greens and green/blacks. These works are strongly inspired by the tactile shorelines of the Isle of Wight.

David’s landscapes and seascapes of the Isle of Wight and abroad are incredibly commanding and must be seen in person.

“All my work is concerned with landscape and seascape. I am fascinated by marks: the painters and those that humans make when they work the land. The spirits of artists and land workers past and present shape my view.

“I work on a large and small scale in oils, tempera and watercolour. I use tradition as my touchstone and modernism as my flight.”

Petra Lunenburg
Petra Lunenburg is a Dutch illustrator who recently relocated from Amsterdam to the English south coast. After her graduation at ARTEZ (Arnhem) fashion design she has been working as a freelance artist for clients in fashion, art and advertisement.

Studying and teaching life drawing contributed to developing a style in which her lines are dynamic, projecting the essence of her subject. Layering a variety of media, ink, oil pencil, acrylic paint and gouache, her drawings show bold strokes as well as refined detailing.

“When drawing I am following a very intuitive process in which I am creating many versions to get to ‘the one’, always looking for the perfect balance of what is revealed and what is hidden.”

The type of women projected are personal and raw, unafraid of imperfections and female sexuality Lunenburg’s creatures radiate power but most of all …life.

Her work is forever evolving, but primarily she paints semi-abstract coastal seascapes using acrylics and watercolours.

These are paintings that shout joy and optimism but are sometimes brooding too, in the tradition of the great British Painter, Hitchens, Nash, Sutherland and Lanyon.

Her more recent work is the result of a trip to Lanzarote.

She has joined four new galleries this year and is looking forward to working with NYA gallery, Tribeca, New York next year and the Van Gogh Gallery in Madrid as well as her collaborations in the UK.

Where and when
The Summer Exhibition takes place on Saturday 24th, Sunday 25th and Monday 26th August 2017 – open daily between 11am – 4pm.

If you are unfamiliar with St Lawrence, from Ventnor continue on the A3055 past Ventnor Botanic Garden until you reach Old Park Road (on your left) and then follow the signs for Binnel Studios.

Entry is free, but don’t forget to visit the cash-point first, because you might just fall in love with what you see.

Our thanks to Binnel Studios for sponsoring this event feature. They and other businesses taking paid promotion enables you to continue reading OnTheWight for free