Plans to have Royal Victoria Arcade listed as an Asset of Community Value are being supported by the current owner, who has cared for the property for 45 years. 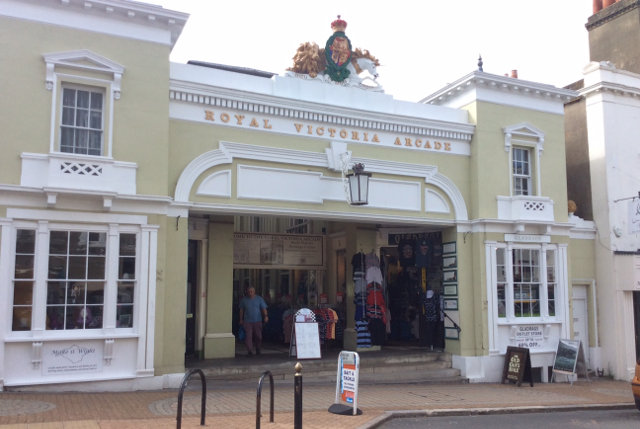 The Royal Victoria Arcade at Ryde – nearly 200 years old and one of the Isle of Wight’s most stunning buildings – is up for sale for £750,000 amid fears its future could be in doubt.

One of Britain’s earliest examples of a shopping arcade, the ornate building in Union Street was opened in 1836 and named after the then Princess Victoria before she became Queen a year later.

But the Arcade is haunted by the spectre of what happened to it in the early 1970s, when it was left derelict for several years – a situation experienced today by other historic buildings in the town. It has also survived at least one attempt at having it demolished.

Lovingly restored
Restored in 2011, the building features an Italinate front, stained glasswork, and the façade is topped with a rare example of the arms of the Princess.

Today it houses 14 commercial outlets, including antiques and collectables specialists, a café and the popular Underground History Museum of Ryde, which incorporates the world famous Donald McGill ‘saucy seaside’ postcard museum. There are also a number of private tenants.

Asset of community value
Ryde Mayor Michael Lilley this week called for the Grade 2* listed building to become a “community asset” under the Localism Act so there is time to explore a people’s buy-out.

The current owner has cared for the arcade for the last 45 years and is retiring.

“I would personally love to see a community bid for the Arcade as it is a very important part of our heritage. However, this will have to be discussed by Ryde Town Council.

“Ryde residents like myself want to know that whoever owns the Arcade it is in safe hands as it is an iconic part of our Georgian/Victorian Heritage.”

Support from owner
The owner, Roy Cartwright, who regularly travels down from the Midlands to see the tenants and check on the building, commented:

“I would be happy to see the Arcade in Ryde Town Council hands.  I’ve loved the place for the last 45 years since my father saved it in 1973, and echo others’ thoughts about its importance to the heritage of Ryde.

“I wouldn’t wish it to end up in the hands of a speculator who allows it to deteriorate.” 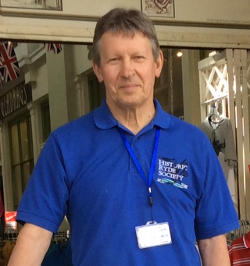 Voluntary Service in 2015, the highest award given to UK volunteer groups and equivalent to the MBE.

He said he was “cautiously optimistic” that whoever takes over the building will want to continue to support it and the people who work there. He explained,

“However, we at the museum are all volunteers and have to generate £640 a month in rent. We’d be worried about a rent increase.

“We promote Ryde’s history and visitors come from all over the country and the world to visit us. There’s particular interest in McGill, a graphic artist, who produced world famous saucy postcards many of which were banned.”

Twenty-one of the banned cards have recently been reprinted by the museum for the first time since 1954.

Protecting the ice well
Brian went on to say,

“We also want to ensure that the unique ice well remains open to public view.”

National importance
Stella Davis, chairwoman of the Ryde Society, said the Arcade is an amazing piece of Ryde’s history,

“It is of high importance nationally and we should treasure it and improve it.”

OnTheWight has approached the owner of the Arcade for their view on the plans to lodge the property as an Asset of Community value.

Cllr Lilley has such grandiose plans – especially when it comes to spending other peoples money!