‘Fight for what you believe in’, says young Isle of Wight campaigner involved in several causes

Continuing OnTheWight’s series about young Islanders doing positive things with their lives, we meet Cameron Palin. 16-years-old and involved in many causes important to the Isle of Wight community. 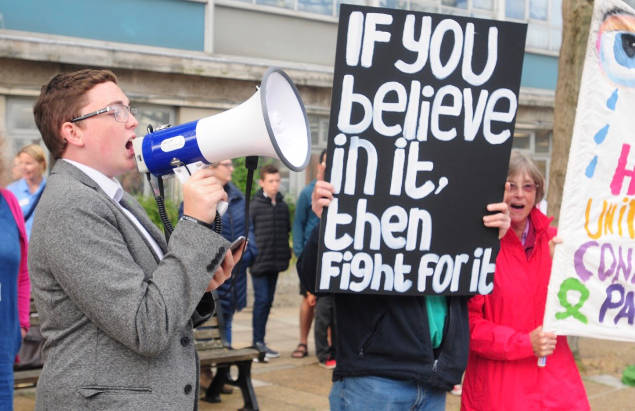 A GCSE student at Cowes Enterprise College, during the last three years Cameron has become more and more active in community causes such as Ryde arena, the Cowes floating bridge and Isle of Wight Pride.

Palin: “You have to take action”
Cameron tell us that this was due to realising how much these things meant to Island residents.

“When campaigning for these causes I’ve become increasingly aware of more and more causes.

“I realised the root of these issues were very politically motivated and you have to take action yourself if you want something to get done.” Joining the Green Party has led to opportunities
Cameron went on to say,

“I took the initiative and made the decision to join the Green Party, for me this has lead to many new opportunities nationally and locally.” He said that all these opportunities led from helping and being active on a local cause.

Fighting to save Ryde Arena
Heavily involved in the campaign to save the ice rink in Ryde, Cameron, along with others has managed to get the council to start a legal process helping the Ryde Arena Community Action Group (RACAG) “take the arena back for the community, not a private investment company”. “The most recent movement I’ve been part of is Islanders for Europe, it gave me the chance to speak to the public and engage with them about how they feel everything is going and what the government should do next on the Brexit front.” Top tips for other young people
We asked Cameron for his top three tips to young people wanting to get out there and do something positive with their lives. He said:

2 Comments on "‘Fight for what you believe in’, says young Isle of Wight campaigner involved in several causes"

newest oldest most voted
Benny C
Good luck Cameron. Let’s hope the voters support your tip no. 3 – holding people to account. It’s vital we are more interested and better briefed in how our island is run rather than relying on hearsay, spin and versions of the truth people would prefer we all believe because it suits their ambitions or point of view. If we really care we should all commit to… Read more »
Vote Up4-5Vote Down
confidential