The news was confirmed by the Director of Regeneration whilst talking about regeneration plans in the pipeline. Details within. 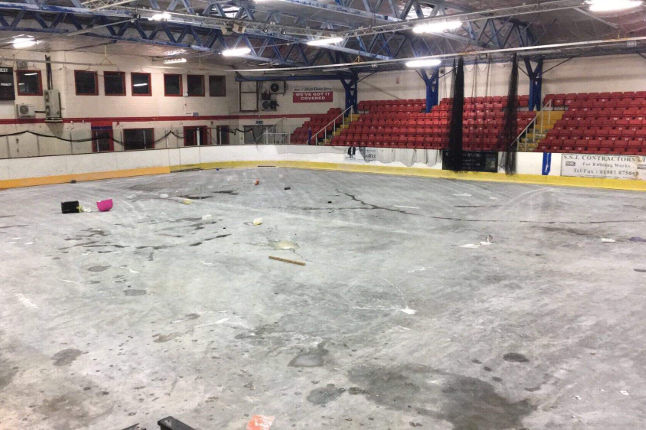 Back in October, Cllr Wayne Whittle stood outside Ryde Arena and announced that the Isle of Wight council was “going legal” against the leaseholder, AEW.

This week the council’s Director of Regeneration, Chris Ashman, confirmed the IW council have taken the lease holder for Ryde Arena to court.

Ashman: “We have taken them to court”
Talking about regeneration plans in the pipeline, he said,

“The challenge there [Ryde Arena] is we have got a long term lease holder who isn’t really doing anything with the building.

“We have taken them to court, asking them to honour the commitments of the lease.”

OnTheWight has asked the council when the action was taken and what the outcome was.

“The court hearing hasn’t taken place yet. It’s scheduled for some time in the New Year but I will seek clarification as to when.”

AEW statement
In a statement to the BBC in October, AEW said:

Negotiations had shown “there is currently no party in a financial position to continue operating the property as an ice rink and the council does not wish to assume this role”.

“However, AEW continues to have a dialogue with the CEO of the Isle of Wight Council, in the hope of finding a satisfactory resolution, potentially as part of the council’s longer term plans for the regeneration of the seafront.”

OnTheWight has contacted AEW for a comment on the court case.

Update 14.16 – AEW’s PR advisors got in touch following publication of the article saying,

“Saw your piece earlier – just to say there is no further comment from us.”

Protecting the council’s asset?
Back in February 2018 OnTheWight contacted the Isle of Wight council to inform them of an open external door, which meant people could gain access to the building.

A spokesperson for the council said, “although the council is the freeholder, the security of the building is the responsibility of the leaseholder”.

We understood that AEW might contractually be responsible for security, but as the building is a council – and therefore pubic – asset, we asked whether the council should take action to secure the building/door – to do what they can to ensure the tax-payers’ asset is protected?

The response we received was,

“Responsibility for securing the building and doors rests with the leaseholder for the building.”

Current state of the building
One of the campaigners for a return of the Arena to an ice rink, Cameron Palin, shared photos of the inside of the arena in its current state (as of December 2018).

He told OnTheWight the back door of the premises had been left open and photos had been sent to him.

newest oldest most voted
Colin
AEW have no interest whatsover in the Island or what happens to the Arena as long as they make money out of it. They bought the lease when Planet Ice restructured their company into separate companies for each of their ice rinks. It was bought as an investment and advertised on their website for sale at a ridiculous price. The IWC is ultimately responsible for the situation… Read more »
Vote Up46-3Vote Down
Billy Builder

I hope that the council are charging the lease holder full commercial rates for this property whilst it stands empty. In fact by rights it should charge double rates as it would almost certainly charge domestic property owners double council tax for empty properties.

Why would HMRC get first call on any funds? They lost their preferential creditor status in 2002