If you were tuned into Parliament TV just after 10pm last night you might’ve seen the Isle of Wight MP speaking about cross-Solent travel. 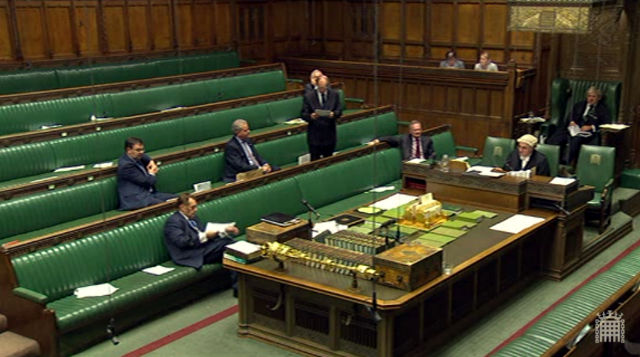 This in from Isle of Wight Conservative MP, Andrew Turner. Ed

The Island’s MP, Andrew Turner, has secured Government support for a wide-ranging taskforce to consider the future of the Island’s transport infrastructure.

Mr Turner had already been involved in discussions to ask for Government assistance in considering options for the future of Island Line, and during an end-of-day ‘adjournment’ debate in the House of Commons last night, he sought and won agreement for the wider Island transport infrastructure to be included, including the ferry services.

Discussion with minister
The debate and request to the Government was prompted by private negotiations between the ferry companies and businessmen working on the Better Ferry Campaign, described by the MP as ‘constructive’.

Discussions had taken place with the Minister in advance of the debate and informal meetings with the Isle of Wight Council also encouraged the Island’s MP to seek what he called a ‘win-win solution’ to the long standing cross-Solent issues.

Support for holistic approach
During the debate, John Hayes MP, Transport Minster praised the Island’s MP for his ‘extraordinary dedication’ to seeking a solution to the Island’s connectivity problems, both behind the scenes and more publicly.

He said his colleague had made a ‘persuasive case’ for the Government to support the holistic approach called for and invited the MP to work with the Council to prepare terms of reference, so that the plan can be taken forward.

Destabilisation of the market
During the debate some of the dangers of the current business model were outlined, with the ferry companies changing ownership for ever-increasing sums, leaving higher and higher debts that can only be serviced from fares or cutting services and costs.

Mr Turner also described how the recent transfer of business from Wightlink to Red Funnel, (which has led to Red Funnel overtaking Wightlink as the most popular route to the Isle of Wight), could destabilise the market, and eventually lead to even bigger problems.

“In the past the competition authorities have looked at the cross-Solent ferries and although they recognised potential problems, decided in 2009 that it was too soon to make a judgement on whether the very high prices paid and resultant debt levels would have an nadverse effect on prices and services.

“I believe that if they look again at the ferry companies they would certainly find the proof they would need to act. If necessary we will go down that route again. But what was true in 2009 still holds true today – there is no easy answer that can be imposed by a regulator. It doesn’t mean there would be no action – but it may not lead to the intended outcomes.

“And we have to be realistic; the ferry owners’ problems translate into problems for the Island. The loss of substantial market share from Wightlink and the effect this could have on services, together with recent discussions between the Better Ferry Campaign and the ferry company owners, gives me the hope that there may be a creative way forward. I have discussed this informally with the Council and believe that with the support of the Government we can work locally on an all-party basis to bring about change. This will not just include the ferry owners, but also the trains, potentially other transport organisations and key stakeholders.

“I am delighted that Kevin George from Red Funnel has already contacted me to confirm their full support for this initiative and I look forward to working with him, and hopefully the other ferry companies to look at an integrated solution to the Island’s long standing connectivity and transport problems.”

Online supporters
Mr Turner also thanked everybody who has supported the Better Ferry Campaign and the Are Wightlink the Right Link Facebook page, saying:

“The level of support and some of the comments made on-line in these campaigns helped me to convince the Government of the strength of our case. I hope we can all now work together to find the best way possible way forward.”

You can watch the footage on Parliament Player.
Andrew Turner’s section starts at 22:12:48

newest oldest most voted
mat
Andrew Turner has raised some salient points in the House of Commons last night.The formation of a “Task Force” may be a useful mechanism to move the objective situation forward if it involves all interested parties, given the circumstances that the MP has outlined. An innovative model defining the transport infrastructure could supersede the present problems if the imagination for the future of the island is there.… Read more »
Vote Up00Vote Down
Niton Wight Satin
I read the text of the ‘debate’ earlier today http://www.theyworkforyou.com/debates/?id=2014-10-13a.132.0#g132.2 I encourage you to look too. This ‘debate’ is an utter sham. It’s Andrew Turner reading a pre prepared statement and John Hayes responding. It is nothing more that a clear attempt to make it look like things are happening. Nothing is happening. Nothing will happen. It’s all hot air. This sham ‘debate’ is, in short, nothing… Read more »
Vote Up00Vote Down
C clearly
I watched the video. This is a pantomime. Act 1: All MP who were in the House get up and leave. Andrew Turner reads (badly) from a series of pages. Tells everyone about the OFT inquiry he called for and failed to achieve a single thing with … except of course, since then, the prices have gone up. Mentions his mates in the Better Ferry Campaign, another… Read more »
Vote Up00Vote Down
milly
You might be right, NWS, but we have to give him a chance, electioneering, diversion or not. There are some new proposals here worth exploring. We hope that Macquarie are in the mood for compromise and that all interested parties, including unions are allowed to have their input for it to be seen as genuine. If we don’t see results then we should denounce it for what… Read more »
Vote Up00Vote Down
Niton Wight Satin
There’s no one from any other party, because this wasn’t a debate. It was jammed in just before the House adjourned. It’s a trick. A ploy. It’s a means to have something said that has no impact, but can be reported as “Mr Turner said … in the House”. Have a watch of the video. At 22:12:30 the Leader of the House says, “The question now is… Read more »
Vote Up00Vote Down
electioneering
This is a blatant attempt to get re-elected. Appproximately 10 months before every general election, Andrew nice-but-ineffective Turner trots out the ferry trick, keeps on about it long enough to get re-elected, then drops it. Milly says “we have to give him a chance” Well we have. We bl**dy well have. He has had several chances, and he has achieved NOTHING. Turner, get the hell out of… Read more »
Vote Up00Vote Down
Island Monkey

You are all right. An IOW Labour Mp would have made a much better job of bringing these ferry operators to heel :)

What a shambles – Five members present, including one asleep. Speaker struggling to keep awake; and the speech…If this is democracy God help us. I agree Labour would give us better representation, but so to will UKIP.

You think anyone will take the bloke who thinks bringing back cottage hospitals is a good idea seriously?

You seriously think that if it was McKie who called this debate there would be anyone else listening to him?

This is how parliament works. The only time there is anything approaching a full house is at PMQs and when the whips order their members in. Otherwise it’s like a pub at seven o’clock on a tuesday night.

Vote Up00Vote Down
stephen
Adjournment debates are one of the few ways in which an MP may raise a constituency matter publicly in a relatively short time. Surely liaising with the appropriate Minister before the debate should achieve a better result, which is on record, than an unbriefed question which just gets an anodyne or Punch and Judy answer with often no commitment as evidenced by PMQs. Were there not Adjournment… Read more »
Vote Up00Vote Down
milly

If it works then OK, if he doesn’t pull it off and make it open to all parties then we condemn it as a ruse.

Vote Up00Vote Down
Mrs D
I do feel uneasy writing this, but I’m afraid it’s got to be said. Is this really the man who is representing the Isle of Wight to the rest of the country? This should have been Andrew Turner’s finest hour. He had weeks to prepare, there was no pressure on him as the House was empty, and you’d have hoped he’d have known his subject inside out.… Read more »
Vote Up00Vote Down
Island Monkey

I realise you are a new poster here Mrs D, but good manners dictate that you have the courage to identify yourself when you make such personal attacks? If not, you seem to be one of those ghastly trolls we read about.

Vote Up00Vote Down
Don smith
Yes! I must agree with the comments written by Mrs D. (I do wish those posting would give their names). Is she [Mrs D], or a relative of a Tory with ambitions? Andrew has been a very good MP for many years, A honest, hardworking man, however, time catches up with all of us. Since suffering his stroke Andrew he has not been the same man he… Read more »
Vote Up00Vote Down
tryme
I expected the worst of Mr Turner’s performance when I finally this morning got around to watching him in the Commons. I was very pleasantly surprised. He read his speech in the sort of quiet but expressive way that encourages people to listen, and which pulled no punches about his opinion of the way the ferry companies behave and what Islanders think about it. He drew together… Read more »
Vote Up00Vote Down