The council say new plans for Isle of Wight Fire and Rescue Service will improve safety for Islanders, but those on the front line say the review is being “clearly driven by financial savings with little or no regard for public safety”. 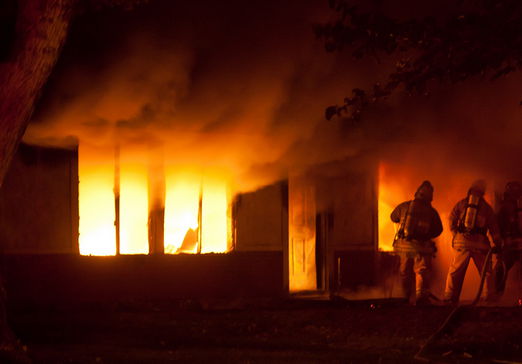 On Tuesday this week (5pm at County Hall) the Isle of Wight council Scrutiny Committee will be considering the latest Fire Service Review paper prior to it going before the Cabinet members on Thursday (5pm at Ventnor Winter Gardens).

Isle of Wight firefighters have told OnTheWight they’re “amazed that the IW Council are attempting to force these proposals through for the third time” and that they believe the Service Review project is being “clearly driven by financial savings with little or no regard for public safety” (more below).

“This new shift system and levelling out of rostered staff makes absolute sense and would improve safety for Islanders.

“More firefighters would be on duty when research says there is most demand and it would have no negative impact on response times.

“It would also allow the service to reflect the modern role it now has. There are fewer fires and fire safety work is increasingly important, so this needs to be factored into how the service is run.”

“Firefighters and FBU members on the Island are amazed that the IW Council are attempting to force these proposals through for the third time!

“As a service we are already short of firefighters and feel that any further reduction would have a detrimental effect both on the service we can provide to the public and to the safety of firefighters. The recent summer heatwave and hotel fires in Sandown have shown how we struggle to cope with incidents with our current establishment, a further reduction in numbers will only add to these struggles.

“The FBU will continue to campaign for no reduction in establishment of firefighter numbers, safe crewing levels of 5 on appliances, an effective recruitment campaign for retained firefighters and a budget to allow us to provide a safe and efficient service to the public on the Island.

“This Service Review project is clearly driven by financial savings with little or no regard for public safety.”

IWC’s view not shared by firefighters
Many firefighters appear to have a different view, as expressed on the Isle of Wight Fire Service Review and you Facebook Page.

“The IW council seem committed to saving money by cutting firefighter posts on the Island. They have not assessed risk, just demand, a practice that the National Fire Chiefs Council has stated is not the correct way to assess a service.

“Yet another new paper is to go in front of Scrutiny on Tuesday and the Cabinet on Thursday. Once again issued as near to the legally allowed date as it could be.

“The paper will once again state that new technology and equipment can replace firefighters. The high pressure lance or Cobra is a tool to assist firefighters safety and prevent dangerous backdraught situations. It does not extinguish fires miraculously.

“The Island does not get immediate back-up like other counties. It is an Island and requires resilience. If Island firefighters are to ride its rescue pumps with four riders, why do Hampshire ride theirs with five crew?”

IWC and management “put finances before public and firefighter safety”
They go on to say,

“These cuts are being made while the RDS system is 23 firefighters under-staffed and a rushed recruitment drive is trying to swell it with new recruits who will need at least a year to be trained to wear breathing apparatus safely.

“Once again, our view is that the council and fire service management will put finances before public and firefighter safety and pat themselves on the back for managing a budget through cuts.”

Public welcome
The review will be discussed at the Scrutiny Committee meeting on Tuesday (9th October), starting 5pm at County Hall.

It will then go to the Cabinet meeting, to be held at the Ventnor Winter Gardens on Thursday, 11th October at 5pm.

Image: adambelles/ under CC BY 2.0

newest oldest most voted
Benny C
Isn’t it reassuring to know that the decisions affecting fire safety for us all is in the competent trained hands of those responsible for the floating bridge, reorganising the refuse and recycling, Sandown Council openly conducting itself like an episode of The Muppets, absentee Council members – the list goes on. What did we do to deserve this? Well, we voted them in. Now let’s vote them… Read more »
Vote Up110Vote Down
Geoff Brodie

Last April the Scrutiny Committee pushed the leadership into securing an impact report before confirming the proposed service cuts. What is being presented tonight isn’t an impact report. It just more codswallop from a leadership determined to save money no matter the effect on the public. I have little doubt the Scrutiny Committee will reject it, but that the Cabinet will ignore them on Thursday.

Well, no surprises there then.

Can anyone imagine the charlatan class within our Council rushing to the rescue of anyone on the IW? Get real