Flicking the switch on a new power link to the Island

A new £13m undersea cable linking the Isle of Wight to the mainland has been completed ahead of schedule by Southern Electric Power Distribution (‘SEPD’), making the electricity supply on the Island more robust and resilient. 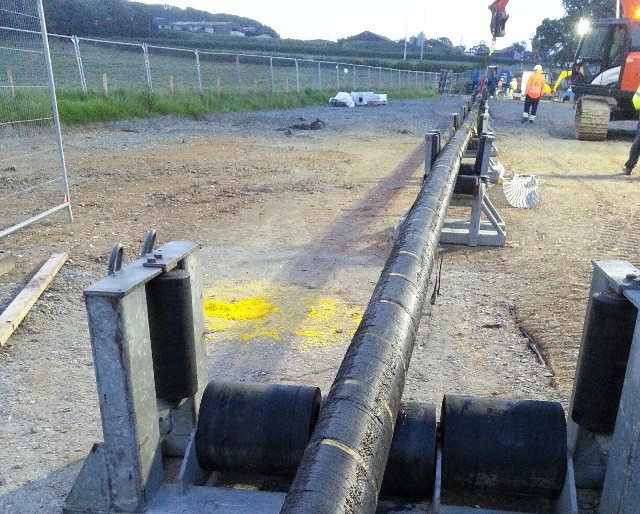 This in from Southern Electric Power Distribution, in their own words. Ed

The high voltage subsea link between Thorness Bay and Lepe was originally planned to be powered up in the autumn, but such was the good progress, it was actually energised at the start of September.

This project, to replace one of the existing cables with a new cable using the latest technology, was carried out in two stages, starting in October last year. The first six-week phase, to install the cable ducting was completed last October. The second phase, to install the specially designed cable itself, started in June and the energising process, which saw electricity starting to flow through the cable, was successfully completed last Friday, 12 September.

SEPD’s Project Manager, Chris Smith, explains what the new cable will mean for customers living and working on the Isle of Wight:

“Keeping the lights on safely is our number one priority and this new replacement cable, which is buried below the seabed and away from danger, means it is much more robust and reliable.

“This new replacement cable connecting the island to the mainland, along with the two other existing cables, also means that whenever we have to carry out maintenance on one of the circuits, we will always have two other resilient cables to rely on as the essential back up.

“I’d like to thank the local communities for their patience and understanding as we carried out the essential work. We’d originally anticipated having the work all completed in the autumn, and so to have everything in place and the new cable live ahead of schedule is great news for everyone involved.”

Does that now mean that there is more capacity to take surplus power generated on island to the mainland?

Vote Up00Vote Down
Steve Goodman
Good question. A few years ago when the Island’s solar renewable electricity supply started to exceed local demand at certain times, Ecoisland’s David Green started working with Toshiba & others to remedy the problem of being unable to send the surplus in the opposite direction. One continuing result is our capability to use that excess to create hydrogen (from water), which can then be used directly as… Read more »
Vote Up00Vote Down
eddo
My understanding is that when the sun is shining and all people are on the beach and the only power used is for the home freezer and the ice cream machines then the island is truly producing more power than being used The moral problem is that the owners of the panels etc are paid 70p per kWr by the poor consumers aka the people. The rich… Read more »
Vote Up00Vote Down
old bull
Eddo is half right the lack of capacity under the Solent is restricting further green energy development on the Island because of this lack of capacity. But he is completely wrong about the amount paid to solar panel owners. When the government wanted to encourage this green energy production the price paid was about 25p/Kwhr. The price is currently about 15p which is due to reduce again… Read more »
Vote Up00Vote Down