‘It’s always sunny in Ventnor,’ Grumpy the 30+-year-old Grey Seal had heard, so he popped over from West Sussex to “chill out on the Island for a bit” 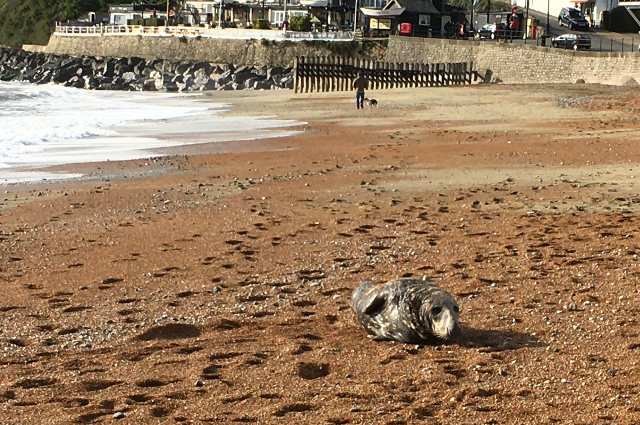 Ventnorians have welcomed a new visitor to the bay this afternoon, as OnTheWight’s video below shows.

Say hello to ‘Grumpy’, a Grey Seal thought to be over 30 years old.

Julia from British Divers Marine Life Rescue explained to OnTheWight that Grumpy left West Sussex mid-morning on Wednesday and has arrived in Ventnor to “chill out on the Island for a bit”.

She’s asked that people do not approach Grumpy, he is fine having a rest on the beach and quite capable of getting back into the water when he’s ready. Don’t let dogs go near him.

The skin of a Grey Seal is incredibly thick and the hook is not impeding Grumpy’s swimming, so the idea of jumping on him to remove it would just cause more stress, Julia explained.

He might be called Grumpy, but looks pretty happy in this video.

Thanks to Lesley Genge from Lesley’s Nutshell in Ventnor for the heads-up.

Lovely to have a non contentious article and a completely non political one.

Perhaps he should be called Bob. Sealy?

Brilliant! We should give him a cabinet role in the IOWC. way more effective than current incumbents and not likely to want to join a radio talk show! .