The mastermind behind attempt to smuggle 100,000 illicit cigarettes into the UK has been sentenced today. 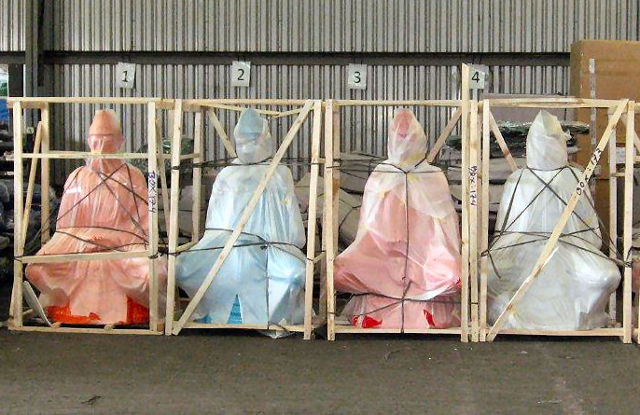 This in from the HMRC. Ed

A furniture importer from Brighton who allowed hollow statues of the religious icon Buddha to be used to smuggle more than 100,000 illicit cigarettes into the UK has been sentenced today.

James Reber, 51, was questioned by officers from HM Revenue and Customs (HMRC) in June 2013, after Border Force officers at Southampton Port searched a shipping container which had come from Indonesia. They discovered five, multi-coloured, fibreglass statues of Buddha which had been filled with illicit cigarettes. “This was a crafty attempt to smuggle illicit cigarettes into the UK, solely to avoid paying excise duty and VAT. Thanks to the vigilance of the officers at the border Reber’s ploy to make a profit at the expense of the taxpayer failed miserably.

“We will continue to work with Border Force and other law enforcement agencies to take action against those caught committing this type of criminal activity and I urge anyone with information about the sale, smuggling or supply of illegal cigarettes or tobacco to contact our Customs Hotline on 0800 59 5000.” Paperwork for the container led HMRC to Reber but when questioned, he told officers he had imported ‘furniture’ in the container but denied knowing anything about the Buddhas or the cigarettes – he later pleaded guilty to evading £31,000 in excise duty and VAT. What was the sentence? If it comes to that, what/where was the court? If it happened in 2013, has it only just come to court? Is there an Island connection? If HMRC are going to put out press releases, it would help if they did it properly.

Not included in the main body of the release, but in notes to editor, Mr Reber was sentenced to 18 months in prison, suspended for two years, at Lewes Crown Court today. He was also ordered to carry out 150 hours of unpaid work.

No specific Island connection, except that some Islanders work in the Southampton ports.

Nice little earner! Who says “Crime does not pay”?

Who in their right mind would buy a life size multi-coloured fibreglass Buddha? No wonder the Revenue men spotted them a mile off.
He should have got probation purely on aesthetic grounds alone, so that trained interior decorators could check his gaff weekly for pictures on velvet or posters of chimps reading the Sun on the lavatory.