There’ll be a varied range of designs and diversity of competitors at this year’s Quarter Ton Cup. 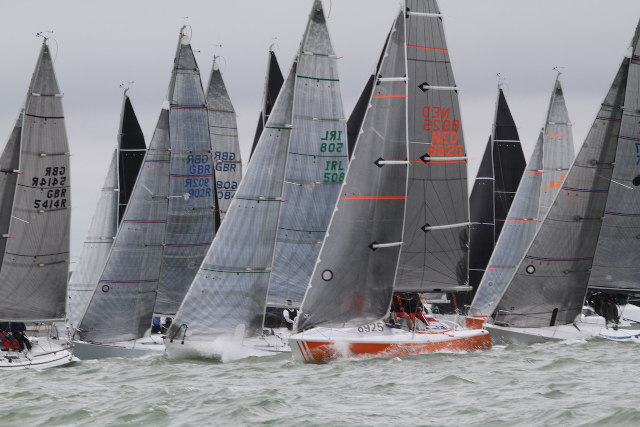 The fifteenth edition of the revived Quarter Ton Cup is less than a month away with more than 20 boats expected on the start line come 10—12 June for what is building up to be an intense and intriguing battle.

Three days of inshore racing with three races a day on the Solent are planned for the fleet which is famed for its intense competition on the water and friendly social scene on shore.

Formidable competitors
Most of the quarter ton fleet had the chance to shake off their sails and get a taste of the competition that lies in store for them at the Vice Admiral’s Cup held off Cowes last weekend, where an interesting form guide started to emerge.

Setting the pace was Louise Morton and her team on Bullet, and if their performance is anything to go by, they will be formidable competitors come the Quarter Ton Cup.

Vice Admiral’s Cup winners
Morton, who already has an enviable bag of silverware having won the Quarter Ton Cup in 2015 and 2016, said,

“We were pleased to win the Vice Admiral’s Cup as the team on Aguila have won this event for the last four years.

“We are looking forward to the Quarter Ton Cup.”

Morton faced stiff competition over the course of the Vice Admiral’s Cup from Ian Southworth’s Protis, with the two trading places at the top of the leaderboard throughout the event.

After three days of close tussles around the course, Southworth eventually finished just 1.5 points behind Morton, with Tony Hayward’s Blackfun in third place, but on almost double Southworth’s points.

The team to beat
Having won the Quarter Ton Cup for the last two years, Sam Laidlaw’s Aguila will be the team to beat come match week.

Aguila didn’t complete the final day of racing at the Vice Admiral’s Cup, and a fifth place finish will surely have left Laidlaw’s team with fire in their bellies.

Joining the Quarter Ton Cup fleet for the first time this season is Sir Keith Mills and his newly acquired Cote, and his teams’ credentials are impressive.

Top Musto skiff sailor Andy Tarburton is on the bow, Matt Alvarado, a flying fifteen champion is in charge of trimming, with Jules Cole, a BT Global challenge winner in the pit. Mills and his son Alex, both accomplished sailors with TP52 and Fast40 experience, will take turns on the helm.

Extreme Sailing Series winner
Also amongst them is the experienced head of Pete Greenhalgh, a four-times winner of the Extreme Sailing Series, who says the team have learnt a number of valuable lessons from the start of their season, which they will take forward to next month’s Quarter Ton Cup.

“It’s been a fun class to sail in. We have done the Spring Champs and Vice Admiral’s and find when it’s windy our boat goes well but have yet to find the upwind speed in the light-medium to be competitive enough to stay anywhere near the front of the fleet.

“We have a great team and we are looking forward to the Quarter Ton Cup. We are hoping with a few modifications we can get into the top five.”

Rumour mill working hard
Rumours in Cowes are that the 1980 Quarter Ton Cup winning boat Bullit which was the second of Jacques Fauroux Quarter Ton winners from that design, has recently been discovered in Tahiti and shipped back to the UK for a major refurbishment by an existing Owner.

If this is true, this Quarter Ton Cup will be their first event and will be the fourth ‘Bullit’ design Jacques Fauroux quarter tonner in the Solent.

Diverse designs
The uniqueness of the quarter ton fleet, especially in 2019, is the diversity of the designers. Last year in a fleet of 22 boats, there were 16 different naval architects represented which is unheard of in modern fleets.

Back in their day, so many young naval architects cut their teeth in quarter tonners and with the growth of strict one designs and lack of any level rating box rules in small boats, that opportunity simply does not exist.

Varied range of competitors
As well as celebrating a vast range of designs, the fleet is unique in welcoming a diverse range of competitors from trans-ocean racers to world champions, alongside a handful of previous winners and newcomers to the fleet, making for an exceptional line-up.

And with almost every team realistically capable of winning races, we can expect plenty of twists and turns come the first start gun.

Find out more
For further information about this event including the Notice of Race and Entry Form please visit the Quarter Ton Cup Website.