We speak with Dr Gary Lee, the project lead, as a new neurological research project gets underway on the Isle of Wight. 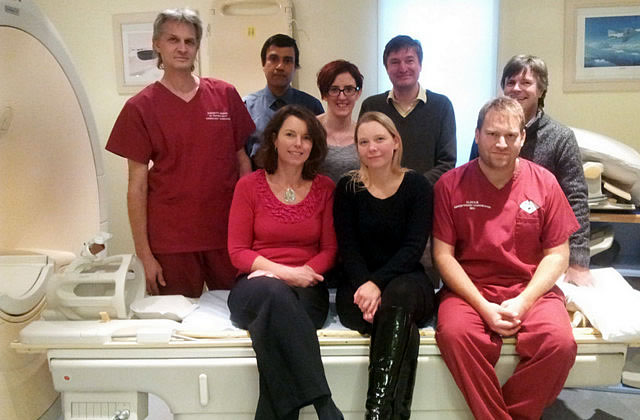 A brand new neuroscience research project into the chronic pain condition, Fibromyalgia Syndrome (FMS), was launched at St Mary’s hospital on the Isle of Wight at the weekend.

This exciting project is a collaboration between the Island’s Radiology and Chronic Pain departments, as well as colleagues from Imperial College and University of Southampton University (who have given their time for free to help set the project up).

It’ll be exploring chronic pain, specifically in patients with Fibromyalgia Syndrome (FMS) and Chronic Fatigue Syndrome and putting some new research techniques into use.

Interview with Dr Lee
At the launch, we managed to grab some time with the project lead, Dr Gary Lee, who is Consultant Clinical Health Psychologist on the pain team.

The launch focused on the use of the MRI scanner to look at potential alterations in brain activity of people with the conditions and two members of the Patient Support Group with FMS agreed to take part in the scan. 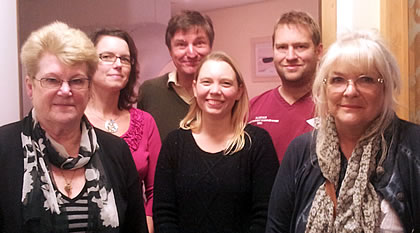 How prevalent is the condition?
The number of residents on the Island diagnosed with FMS is hard to grasp, said Gary.

He has a database of at least 200 people with a diagnosis, but felt the actual figure was probably higher.

He’s hoping that the research project would allow the team to collect a definitive number of Islanders with FMS to add to national statistics.

Growing research interest in FMS
Gary explained how research into FMS and widespread chronic pain conditions is growing across the globe, adding that if scientists can understand the neurology that underpins the conditions it can help unlock the understanding of lots of other conditions too.

What makes the project taking place on the Island unique from other projects around the world is the focus on the increased central nervous sensitivity that many sufferers of the condition have.

Many people with FMS report an increased sensitivity to touch, sound, light and temperatures, so as an example, through the use of the MRI scanner researchers could see how the brain activity changes when the subject is exposed to strong light, sound or other factors.

How trauma and threats play a part
It’s well documented that some of the triggers for FMS include trauma to the body, long exposure to stress and post-viral infections.

Gary explained that the team on the Island will be specifically looking at the physiology of the nervous system to trauma and stress that patients might have been exposed to in the past (rather than their psychological responses).

Growing numbers of people with FMS
Asked whether the condition is more prevalent than in the past, Gary said he felt it was, but added that diagnosis has improved over the years which may be why we see a rise in numbers.

As Gary says at the end of the interview, the project is a clear statement for people with FMS that the condition is being taken seriously.

He pointed out that not everyone could go in the scanner, but there are going to be many parts to the project over the coming year that all can take part in.

Listen to the interview with Dr Gary Lee

Has this project produced any positive result yet? It would be encouraging for those of us so afflicted to get some periodic feedback to mitigate the general verdict that no-one knows what causes it, there is no cure, and there is nothing that can be done about it! Just keep taking pain relief medication.

By coincidence I contacted Gary yesterday to arrange an update meeting, so will report back once I have more info.

Is burning feet a symptom of fibro ?

Vote Up10Vote Down
Tracy
I’d be happy to help wherever possible. I’ve suffered for the last 24 years & feel totally let down by everyone. It’s as if we’re all liars, especially as the illness isn’t recognised. I can’t work & we dont get any financial help apart from mobility & blue badge which I’m waiting for them to clsmp down further on that, just so the numbers look good. The… Read more »
Vote Up10Vote Down
FMS sufferer

FMS is absolutely recognised by the government. If anyone is telling you it isn’t, they are ill informed.

Vote Up00Vote Down
dfwmom
It’s WONDERFUL to see scientists actually looking at the physiology of Fibromyalgia, doing real studies, instead of just paying researchers over and over again to keep telling has wonderfully, fabulously, terrific CBT is. CBT helps like a bandaid on a knife wound helps — a bit, but not THAT much. The article talks about stress and trauma causing it, however. So often, familial fibromyalgia, primary juvenile fibromyalgia,… Read more »
Vote Up00Vote Down
Fibro patient

This would be really interesting dfwmom. Pain is such a subjective thing and I feel many children complaining of pain are brushed off with the excuse of it being ‘just growing pains’.

Having children go into the mri scanner to see what’s happening in their brains would be fascinating. I wonder how many children on the Island have been diagnosed with fms?

Vote Up00Vote Down
garyslee
Dear dfwmom’s I agree that there are very many important aspects of FMS that need to be studied in childhood. I guess we have to start somewhere and this is our humble start. I fully agree that CBT alone is not enough, but nor are other medications, or treatments so there is work to do. We are but a small cog in the international efforts to understand… Read more »
Vote Up00Vote Down
garyslee

thank you for your support and I am glad the interview made sense. best wishes g

Oh – How I Welcome to read of this development at 0430 on a particularly achey AM!

From a fibromyalgia/CFS patient’s point of view, this is great news. Am willing to be a guinea pig if needed to help find out more about this debilitating condition

Hi, great to see! Do we know any results of this or is this research ongoing to this day? I would be interested in taking part.

I was diagnosed with FMS & CFS in 2008, it’s a terrible condition with so much pain and fatigue, I’m currently waiting to go to the pain clinic as my meds are no longer working.
Other things linked to FMS I had started at age 19 , I’m now 46. If there are any trials you need people for I’d be happy to play Guinea pig for them!

The pain clinic at St Mary’s is brilliant. I’ve tried just about everything – traditional and alternative – over the last 15 years and found the most effective treatment has been Pregablin (epilepsy drug). It stops around 75% of pain previously suffered, but I still need to pace myself and am limited in what I can do.
Best of luck with the clinic.

Vote Up0-1Vote Down
Tracy Goodyear
I’m glad you have found some relief through st Mary’s pain clinic. I’m unfortunately not living on the IOW but have taken an interest in progression of this study only yesterday and am taking note of any things people have found helpful. I will certainly mention Pregabalin to them, however we know as sufferers that not everything works for everyone and we all have different things that… Read more »
Vote Up00Vote Down
Irene hughes

Vote Up00Vote Down
Sandra Drennan
I have been suffering with fibromyalgia for about 20 years and now my son is starting to show signs of it too and he is only 15. I tell him it is growing pains because he is afraid he will end up like me. It would be great if children where involved in this research so they could be helped before they get to the stage of… Read more »
Vote Up00Vote Down
Christine Faulkner
I have only just found this on the internet. I was diagnosed with Fybromialgia in the rheumatology at St mary’s. It’s getting worse pain and stinging of the top of my feet numb toes on both feet and stinging and pain on the tops of my hands. I could says its all over my body but this the the worse places. Looks like I’m too late to… Read more »
Vote Up00Vote Down