Members of the public opposing cuts to public services made their feelings clear at last night’s full council meeting with these banners. OnTheWight hears the reaction from councillors and politicians. 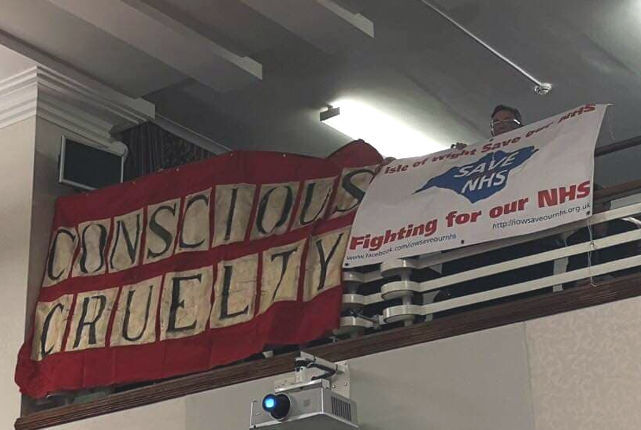 At last night’s Isle of Wight full council meeting, members of the public unfurled banners from the public gallery in protest of proposed cuts to public services.

Two banners were unfurled at the meeting, one which read ‘Conscious Cruelty’ made by Elaine Pitt for the Isle of Wight Labour Party and the other from the IOW Save OUR NHS Group.

Lightbody: “Not just going to sit back”
Christine Lightbody from IOW Save OUR NHS Group told OnTheWight,

“We were not at all sure what the reaction would be to the unfurling of banners from the public gallery, but we were prepared to take the risk of being removed to make it clear that people on the Isle of Wight are not just going to sit back and accept more austerity decisions that will affect Islanders so adversley”.

Jones-Evans: Another round of cuts “just makes me despair”
Cllr Julie Jones-Evans – who took the photo of the banners and tweeted it last night – told OnTheWight,

“I guess I feel that having to face another round of cuts when we have as a council already gone into the bone and deeper than any other council and the government saying austerity is over, just makes me despair.

“We’ve proven the case to Government about our £6m extra costs, but still no cheques on the way.”

“I worry about the long term damage and if we can recover when we finally get the financial settlement that we need. It’s no wonder that residents feel the need to get their message across in such ways.”

“The protest banners were unfurled peacefully. They were a manifestation of the increasing anger many Islanders are feeling over the Tory lie that austerity is over.

“It is clearly not over when government still expects Councils to make savage cuts and Tory councils do so without productive protest.

“I am sure there will be more protests in the weeks to come and they will have my unequivocal support.”

Pre-meeting demo
Prior to the meeting, Islanders protested outside County Hall. They included representatives from IOW Save OUR NHS Group, Isle of Wight Fire & Rescue Service and Unite the Isle of Wight Group.

The were protesting against cuts to the Local Area Coordinator Service, cross-Solent Travel Scheme and cuts to other public services.

“I think this demonstration of public opposition to the endless cuts inflicted on the Island by the Conservative Government and Conservative Council represents a turning point.

“For far too long, the Tories have acted as if they can take Island voters for granted. They have slashed local services, removed NHS provision from St Mary’s, and underfunded our schools, all while raising charges and taxes on Islanders.

“I believe large numbers of Islanders, and not just the members of the Labour Party who demonstrated at the council meeting last night, are now saying enough is enough. The Tories have treated us as fools for too long.

“Change must come, and the Island Labour Party will do everything in its power to ensure that it will come.”

Silence from council leader
OnTheWight contacted Leader of the Isle of Wight council, Cllr Dave Stewart, for a comment about the demonstration but at time of publishing he has failed to respond.

I advise Islanders to attend these meetings, they are a eye opener. Time to stop moaning & grumbling on social media. Get into these meetings & have your say.They say cut back I say fight back.I can tell you austerity is alive & kicking hard in our Tory led IOW council whatever their esteemed leader says.

Silence from the ” leader” of the council Dave Stewart. Maybe we can give the lot of them the silent treatment next time they want our vote.

Vote Up20-5Vote Down
redstream
This is all happening because the Government continues to ignore the ” unique ” position of the IOW and refuses to deliver the necessary financial support which is needed. The previous MP Andrew Turner was winning the argument with senior Ministers. We have to ask what arguments Bob Seely MP is using to continue the fight? He started well but his efforts seem to have fizzled out.… Read more »
Vote Up18-3Vote Down
Geoff Brodie

On or two of us have been opposing ‘the lot of them’ for many years. That is probably why I have been elected four times as a Labour councillor and remain a staunch Labour supporter and Tory opponent. We need better Labour candidates than previously offered and people voting instead of being silent.

Having Labour councillors who don’t live in Manchester would help also, Geoff.

In fairness to Bob Seely, he has said, “judge me by ‘my’ results”. Which of course the electorate can do in the next General Election.

Vote Up5-5Vote Down
realitycheck
I noticed the banner – “Save Our NHS” …hmm….not actually sure what needs ‘saving’ and from what / whom…? And who are these community superheroes who are saving the NHS…? Of course if this is about stopping the ‘selling off’ of the NHS and / or services they provide to private companies and the third sector then I wonder if this group understands the dynamics of how… Read more »
Vote Up3-6Vote Down