Inspired by Nobel Peace Prize nominee, Greta Thunberg, this Isle of Wight climate campaigner shares her story about why she’s been outside County Hall every day this week. 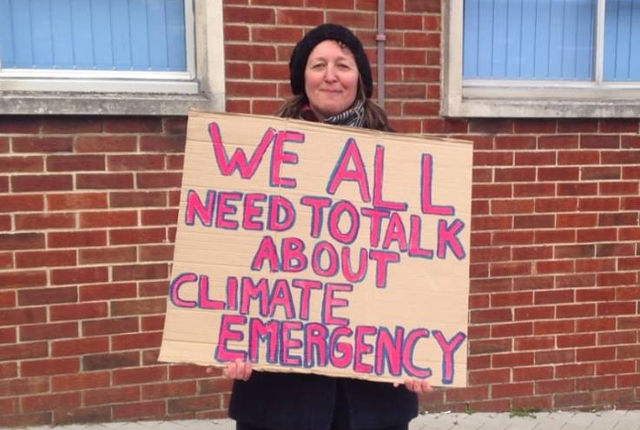 Every day this week a woman from Ventnor has been standing outside County Hall in Newport to raise awareness for the climate emergency.

Through wind and rain, Julie Hutchison, has been waving her placard at passing traffic and speaking to those willing to stop for a chat. She explains below her motivation. Ed

I woke up on Monday morning and just decided I wanted to do this. I’ve been protesting on my own outside County Hall all week.

I asked my son if he thought it was a crazy thing to do and he said “No Mum, I think you’re being very responsible”. That was all the re-assurance I needed.

Inspired by Nobel Peace Prize nominee
I’ve been so inspired by Greta Thunberg who has been leading the School strike movement (she’s since been nominated for a Nobel Peace Prize), and a friend made a comment to me over the weekend that sometimes it only takes one person. I just feel like I have nothing to lose at all by doing this.

I borrowed my Dad’s waterproofs and asked him to look after the dog (the dog eats insect food by the way).

Support from passersby
I’ve met so many interesting people this week. On Tuesday in the storm I spoke to seven 16-18 year olds. A few of them had never heard of climate change, and they were good kids – really respectful and interested in what’s going on.

I enjoyed talking with them, and telling them that our lifestyles contribute to greenhouse gasses, and that the Isle of Wight Council must declare a climate emergency. A few of them knew that the Arctic is melting, and the dire consequences that will have on sea levels.

I’ve spoken to homeless people who gave me a hug and told me I’m brave for doing what I’m doing. I don’t see it as brave at all – I just can’t do nothing about the situation we’re all in.

It’s a group effort
We all need to talk to each other, learn from each other and actually act on it, all of us. Group effort, You vote with your spending habits, that’s how it starts. When everyone does the same, then change happens.

Meat eating and the convenience of cars appear to be the most difficult obstacle to overcome – but it’s not difficult. Green lentils make a good substitute for beef, and taking the bus everywhere gives you quality thinking time. You end up doing fewer things, and life slows down quite a bit – but isn’t that a good thing?

I found that once I got used to doing a few things differently, I wanted to do more. Every time I switch off the light, I feel good about it. I rarely put the heating on at home, I just wear an extra jumper and use a hot water bottle. Boil the kettle once and use a flask. Little things.

Leadership slow on the uptake
I don’t understand how the Council are unable to act for the people they serve. I have had the pleasure this week of talking to lots of really kind and considerate council staff who agree, that climate emergency needs to be talked about.

I understand the complexities involved, and there isn’t one person who knows all of it. I met a brilliant mathematician / physicist this week who started talking to me about energy capture that was proved to have worked. I have to admit, my maths isn’t brilliant but he was passionate and sincere about what he knew.

Respectfully open-minded
To me, people talking it out amongst themselves and working out solutions is a great way forward. Collectively I believe we have all the answers we need. And talking to each other, researching and learning what has worked elsewhere has got to work. Communicating respectfully and being open minded to other people’s suggestions is critical – to keep thinking about the bigger picture.

Some have pinpointed Russia and China, but I’ve read recent reports that China and India have planted vast amounts of trees to soak up carbon.

I believe in hope and the good in people. At times this week I’ve felt that I should have 15 cats surrounding me – lots of passers-by can’t make eye contact with me and it’s almost like I’m invisible. I don’t know if that’s because they are disbelieving, or maybe find it too hard to talk about, or they’re looking for the cats. Or they just don’t know. That’s the most worrying aspect for me.

Owe this to the children
As for our children – that’s the most heartwrenching aspect for me. My son asked me if he’d make a good Dad one day. He’d be an amazing Dad. But I couldn’t tell him not to have children, and I couldn’t tell him to have them either. I just told him I think he’s a really decent young man.

We owe this to the children to do everything we can now for them. We owe it to nature to start looking after the earth and not spray chemicals on it. To not buy plastic. We’re aware of it all , but it’s going to take group effort to get through this. And that includes the Council, our Government and Governments around the world. Most serve business and the rich. But they should serve the People and the Planet.

Back again tomorrow
I’ll be outside County Hall all day again tomorrow (Friday) and joining others as they gather for the Youth Strike 4 Climate between 3-5pm.

newest oldest most voted
casw1
I don’t think people realise how dire the situation is. They think the effects will be felt in other countries not our own. That maybe we’ll get a few more lovely summers as a bonus. The Paris 2˚ agreement was calculated on being able to capture carbon and store it.. which is a technology we haven’t tried on any meaningful scale. Many think we are on course… Read more »
Vote Up8-2Vote Down
Steve Goodman
Some important updates: The scientists have said that the agreed maximum temperature rise is not 2 degrees, it’s 1.5 – It’s complicated, but we are said to be on course for 4.5 without everyone acting, 3.5 if improved current policy is adopted and followed, and 2.9 based current Paris pledges (by 2100); all calamitous of course. The present roughly 1 degree rise above pre-industrial level is already… Read more »
Vote Up6-1Vote Down
CB500

I know this lady from the morning dog walk. What a fantastic thing to do. Thank you and well done from the big dog and myself :)

Amazing. An articulate, thought-provoking piece. It did not contain any startling new facts or predictions but I read every word and thought it will be people like her who will eventually persuade all of us we must change.
My only question is what does ‘the dog eats insect food’ mean, is it vegetarian?

Her dog eats a new brand of dog food that uses insects as it’s protein base. Still counts as a carnivorous diet :) Think it is this one https://www.yorapetfoods.com/?gclid=EAIaIQobChMIrrfC88SC4QIVKrftCh0JVAPrEAAYASAAEgLxBPD_BwE