The council say it “has other priorities which it wishes to address using the council’s limited financial resources”, but Vix Lowthion says the costs to the council would be ‘minimal’ and the impact huge. 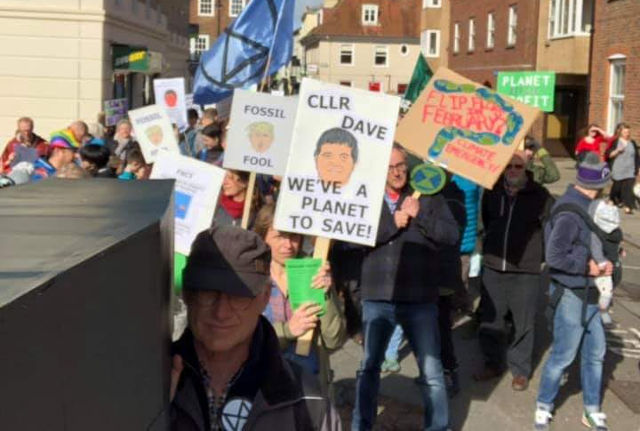 With Islanders preparing to march for climate change on Friday, the Isle of Wight Council has said it will not declare a climate emergency.

However, cabinet member for environment and heritage, Cllr John Hobart, said there were no plans to follow suit on the Isle of Wight.

“The administration has no current plans to consider the merits or otherwise of declaring a climate change emergency.

“It has other priorities which it wishes to address using the council’s limited financial resources. This includes preparation of a local environment action plan as a product of the council’s recent environmental conference.”

Recycling etc
The council said it was already involved with a number of initiatives to help the climate, including recycling, the installation of electric vehicle charge points, a home insulation scheme and supporting the plastic-free Island campaign.

This Friday (15 March) students from across the globe will walk out of lessons to urge political leaders to take action against climate change.

Inspired by the words and actions of 16-year-old Swedish schoolgirl, Greta Thunberg, 15,000 children across the UK took part in the national strike in February.

Lowthion: Recycling waste will not solve climate crisis alone
Isle of Wight Green Party and Extinction Rebellion spokesperson, Vix Lowthion, said it was disappointing council leaders refused to acknowledge there was more to be done to protect the planet.

“Recycling our waste will not solve the climate crisis alone — there are a mountain of additional initiatives which they must take.

“Conservative councils across the country, from Devon to Scarborough, have declared there is a climate emergency.

“We need to reduce our carbon emissions to net zero by 2030 and put pressure on national government to fund initiatives to promote local food, renewable energy and cycle infrastructure.”

“Minimal cost to IWC”
Ms Lowthion said the costs to the council would be ‘minimal’ but the impacts would be huge.

“I hope councillors can meet with children and families next Friday as part of the global Youth Strike and explain directly, face to face to them how they think they are already doing enough.

“Our Conservative council’s refusal to take action to tackle the climate crisis will be a legacy which comes back to haunt them. Three-hundred Islanders took to the streets last weekend to demand action and support from their elected leaders — their inaction will not be tolerated.”

Having also to deal with “other priorities” is not preventing other councils in Britain and beyond acknowledging that our climate emergency has become our most important priority.

Our councillors are either totally overwhelmed by the scale of the problem or they lack vison. Will someone spell out to them the sort of things they can do which will have minimal cost – at least for the sake of their kids and grandkids

Vote Up21-12Vote Down
casw1
We have let down our children and our grandchildren. We have been too lazy to change too easily comforted by the thought that there are doubts about the consequences of our actions too timid to demand action Too ready to wait till some other country or other people take action before we do anything. Recycling is sensible (Any action is better than no action) but like the… Read more »
Vote Up16-10Vote Down
Mark L Francis

Any one else remember “Eco-Island” a few years back?

Vote Up6-1Vote Down
colinteller
A couple of thoughts: 1. Cease the loophole allowing second homers to avoid council tax and NDR by registering as a business and ‘making their property available for holiday let 140 nights per annum’ (has this ever been enforced?). 2. Start pulling over the numerous vehicles on the Island clearly belching out thick black diesel fumes (perhaps having had the legally required, yet expensive, filter removed by… Read more »
Vote Up4-2Vote Down
saveenergy
If as Ms Lowthion said there is a “climate crisis” & “We need to reduce our carbon emissions to net zero by 2030” she & her 300 followers could lead by example – by divesting themselves COMPLETELY from ‘Carbon’ , if they prove that for say 12mts, then I’m sure they could shame the council. I note from the pictures, the vast amount of oil derived products… Read more »
Vote Up5-11Vote Down
Colin

Well said, Cllr Hobart. Whilst there may be things that can be done nationally and internationally, I would prefer the IWC to concentrate it’s efforts to sort out the numerous outstanding local issues. Once everyone stops taking holidays and air flights abroad with all the emissions to save the planet, then I might take notice.