Residents say they were pleased to hear the leader of the council hadn’t personally agreed to any plans to build on the town’s seafront. Catch up with the rest of the discussion in Peter’s report. 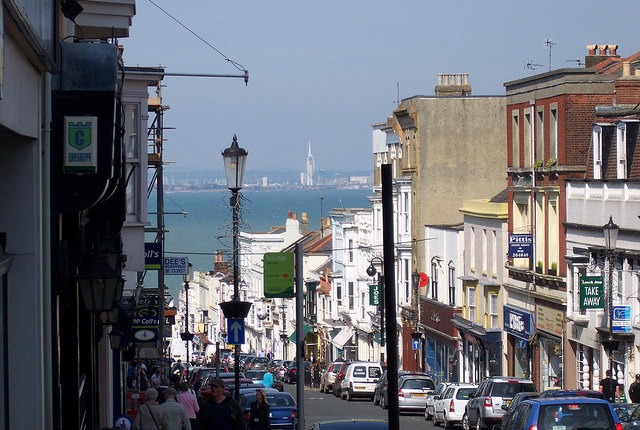 A vision of Ryde high street as a social hub and an attraction for tourists, including cruise ship passengers, was presented by the Leader of the Isle of Wight council, Cllr Dave Stewart, on Monday night.

It was part of an upbeat message by the council chief, who also maintained that he hadn’t personally agreed to any plans to build on the town’s seafront, an issue which had sparked bitter controversy.

He said the high street needs to become a social destination to attract extra visitors,

“There are already plans for pedestrianisation of the high street and that sounds good. Ryde has got a better view than Newport because it’s on a hill.”

He added that the Island is now on the destination list for cruise ships.

Among the exceptional circumstances are the facts that half of the Island is in an Area of Outstanding Natural Beauty (AONB) and the coastline makes some places unsuitable for building.

However, Cllr Stewart insisted affordable housing is needed for young people and families living in temporary accommodation. There are 2,000 people awaiting homes on the council’s housing register.

Not all questions answered
Resident Jonathan Dent said he didn’t think the council leader answered all the questions, but was glad at least that Cllr Stewart personally didn’t agree to building tower blocks on the sea front.

“There are 180 homes planned for green field sites near Bembridge. This is an area where roads are narrow and where there is little infrastructure like schools or public transport.

“How are people going to get around? Surely, new housing should be in areas of employment and industry.”

Other speakers
The meeting also heard from speakers talking about home grown food from The Modern Kitchen Garden, plans to install new designer flags on the Esplanade, arts and crafts at The Lounge in Monkton Village and Wightfibre broadband, said to be as fast as anything in Central London.

Find out more about The Ryde Society by visiting their Website.

Image: adspackman under CC BY 2.0

newest oldest most voted
Colin
Plenty of hot air there, then. What was the budget for the new waste plant and why has the council overspent in excess of £20 million on the project so far? How long will some parts of the equipment last and what will be the replacement cost during the lifespan of the entire plant? The project may produce energy (unlike promises made on previous projects) but will… Read more »
Vote Up11-2Vote Down