Well done to Henry Summerfield, Amy Huyton and George Collins, who have earned their Silver Awards from the British Academy of Fencing. No mean feat, as the sport requires years of training. 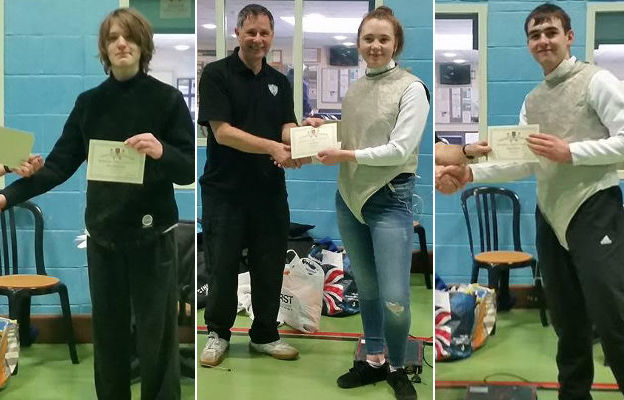 Involving technical, competitive and theoretical skills, the awards were presented by the chairman, Nick Stuart.

Mixed abilities welcomed
Due to larger numbers, the club is setting up separate classes for juniors and adults on Saturday mornings at West Wight Sports Centre in Freshwater.

The club has a wealth of equipment and various levels of ability and ages, with a focus on technical aspects of Fencing to develop to competitive abilities.

The next challenge is an adult competition against the Royal Navy in Portsmouth on 8th April.

One of only five sports seen in every Olympics
Fencing is an unusual sport with elements of speed and agility balanced by tactical awareness and planning. One of the reasons why older fencers are so difficult to beat and why veterans fencing in the UK is so popular, and strong internationally.

It is also a low cost sport, £7 juniors, £8 adults and less per term. All kit is provided with coaching from a professional qualified Coach.

The club is a member of British Fencing the National Governing for this Olympic sport. One of only five sports seen in every Olympics.