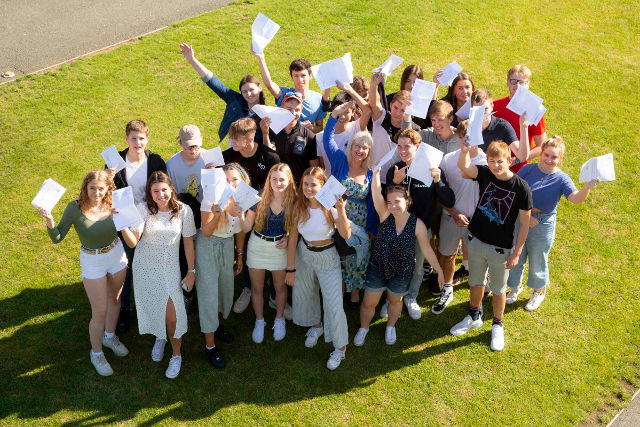 With 19 per cent of all grades at 9 or 8 (the equivalent to the old A*) and 86 per cent at the new pass rate of 9 to 4, students at Ryde School were able to celebrate the results of two years of hard work this morning.

As this is the first year that almost all our exams have been graded on the new 9 – 1 scale, comparisons with previous years are difficult though the results do speak for themselves.

50% of results in several subjects Grade 7 or above
Over half of the results in English Language, Biology, Chemistry and Physics and 44 per cent of the Maths results were at Grade 7 or above (A*/A equivalent) and over two thirds of our pupils achieved five or more 9 – 5 grades including Maths and English, whilst over half secured the EBacc which requires pupils to achieve GCSEs in a range of subjects including Maths, English, Science, Languages and Humanities.

High acheivers
Ten of our students achieved the equivalent of an A* in at least five subjects including Francis Fu from Hong Kong, Zac Gavin from Newport, Charlotte MacLeod from Bembridge, Emily Owen, Oliver Yelland and Lily Schenkel from Ryde, Matthew Oxenham from Shanklin and Eloise Pink and Liberty Turrell from Wootton.

Zac and Emily had particular cause to celebrate with Emily gaining ten grade 9s and Zac nine grade 9s and an A in Additional Maths.

Five further students achieved an average score of the equivalent of ten ‘A’ grades or more.

They included Jiri Illovy from Alverstone, Jack Oswald of Cowes and Patrik Tarin from Ryde.

“The pupils collecting their exams today do so at the end of a challenging time for pupils, parents and teachers as we have all had to adapt to the new exams.

“So many have much to be proud of and whilst we celebrate the outstanding results of those such as Emily and Zac who so deserve their success, there are smaller, private triumphs here too.”