The white-tailed eagles are the first to be returned to southern England for 240 years as part of a five-year programme to restore this lost species. 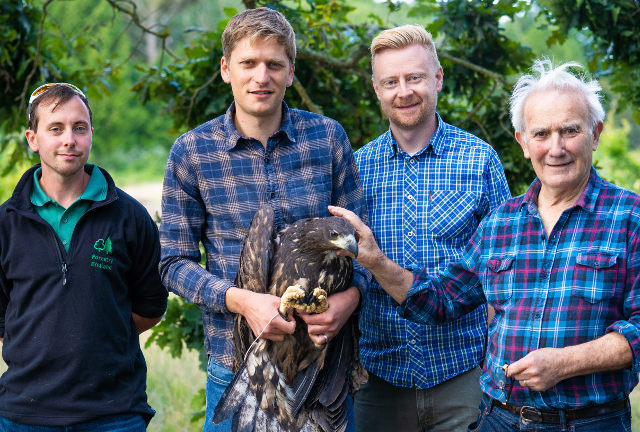 Esta shares this latest news on the release of the White Tailed Eagle. Ed

The first white-tailed eagles to be reintroduced to England have been released on the Isle of Wight. The six young birds, the first to be returned to southern England for 240 years, are part of a five-year programme to restore this lost species led by Forestry England and the Roy Dennis Wildlife Foundation.

The young birds were collected under a Scottish Natural Heritage licence from the wild in Scotland and brought to the Isle of Wight. Here they have been fed and monitored by a team of experts and dedicated volunteers whilst becoming familiar with their new surroundings.

Before being released the birds were fitted with small satellite trackers so their progress can be closely monitored. Data on their movements will be available on the Roy Dennis Wildlife Foundation website and once the birds are well established it is hoped that they will become a familiar site over the skies of the Island and nearby mainland coast.

“I have spent much of my life working on the reintroduction of these amazing birds and so watching them take to the skies of the Isle of Wight has been a truly special moment. Establishing a population of white-tailed eagles in the south of England will link and support emerging populations of these birds in the Netherlands, France and Ireland, with the aim of restoring the species to the southern half of Europe. The team is pleased that the project fulfils one of the specific aims of the Government’s 25 year Environment Plan.

“We have seen from other reintroduction programmes that returning lost species offers real benefits for nature and the health of our environment, and to people and local economies. I would like to thank everyone from the local community who is working with us to support and manage this project including our volunteers and project officer who are all Isle of Wight residents. We are also very grateful to the private donors who are supporting the project.”

Roy Dennis, from the @RoyDennisWF, is thrilled to see white-tailed eagles returned to the Isle of Wight. Hear what this project means to him in this clip. #SeaEagle #WhiteTailedEagle #SeaEagleEngland #RoyDennisWildlifeFoundation pic.twitter.com/DimzFBY9Jz

“The diversity of our wildlife is under real pressure with many species now in long-term decline. The nation’s forests provide an important habitat for wildlife and are playing a critical role in supporting the successful re-establishment of many lost or threatened species.

“We are immensely proud that the woodlands we manage on the Isle of Wight and surrounding South Coast are now home to these incredibly rare birds as they return to England’s coastline.”

Areas where the cliff edges have slipped will provide quiet areas for the young eagles, and its network of cliffs and woodlands provide many potential nesting sites. The Solent and surrounding estuaries will provide a rich food supply for the eagles, with fish such as grey mullet and water birds forming a key part of their diet.

Birds expected to disperse along coastline
The Isle of Wight was also chosen for the project given its central position on the south coast allowing the birds to disperse east and west along this coastline.

A comprehensive feasibility study and public surveys were conducted prior to reintroduction and a steering group made up of local organisations and members of the community has met and is helping to guide the project.

A similar scheme on The Isle of Mull was found to have boosted its local economy by up to £5 million a year, demonstrating the interest in this iconic bird.

Five year programme
The reintroduction of Britain’s largest bird of prey is being conducted under licence from Natural England, the Government’s wildlife licensing authority.

Further releases of the birds will take place annually as part of the five year programme, with at least six birds released each year. It will take several years for the young birds to become established and breeding is not expected to start until at least 2024.

“The return of these spectacular birds to England is a real landmark for conservation. I very much hope that it will also provide a practical demonstration of the fact that we can actually reverse the historic decline of our depleted natural environment.

“It will also show how helping the recovery of our wildlife can be done at the same time as bringing benefits for people, in this case by offering a boost to the local economy through wildlife tourism, as has happened in Scotland after these birds were reintroduced there back in the 1970s.

“As with all applications to restore lost native species, Natural England carefully considered the short and long term impact of reintroducing the eagles on the environment, including implications for local communities as well as the impacts on the animals themselves.

“Everyone at Natural England is delighted to see this project reach this stage and I know just how excited Roy Dennis and the Forestry England team are about this reintroduction. I’m sure the local community will share their passion and excitement and look forward to seeing these magnificent creatures return to our skies.”

Really looking forward to seeing them soaring above and hopefully getting a photo or 10.

Reintroducing a bird that lived here for thousands of years before humans made them extinct. This has to be the most satisfying reintroduction in my lifetime.
Very well done to all involved.

Vote Up21-6Vote Down
Benny C
Not sure Sandown wants to bother with all this sort of environmental stuff. And their local IOW Councillor, a self proclaimed climate change expert, says he knows about this stuff so we ought to listen intently to his insight. That is, when he has done his appointed job heading up the shambolic infrastructure team. It’s reasonable to expect to wait a fair while to hear him opining… Read more »
Vote Up17-10Vote Down
barfy
Wow… I live in a place called Chandler’s Ford, my fiancee and I saw one of your eagles, it flew over our house while we were gardening (involuntarily)… I was shocked to see such a large predator, scanning us from the heavens. I remarked on it because I was a little stunned and sort of excited… I’d only ever seen such a wingspan from eagles in America.… Read more »
Vote Up50Vote Down
Darcy

I look forward to seeing them too. Saw sea eagles in the Northern Territory of Australia for the first time over 20 years ago. But has any thought been given to the impact on garden bird populations on the island? We’ve already seen some of the other resident birds of prey helping themselves.

I hope that there are not too many lambs on the Island.
https://www.fwi.co.uk/livestock/action-plan-aims-to-stop-sea-eagles-killing-sheep
This does not seem to be a clever idea at all if you are a farmer.

Plenty of lambs oh and small dogs, cats etc, too many pets on the Island & It’s not being done for the farmers anyway!