Jonathan Dodd returns with his Sunday column and this week talks tomatoes, but of course, it’s not really about tomatoes, but about something bigger and more thought-provoking. 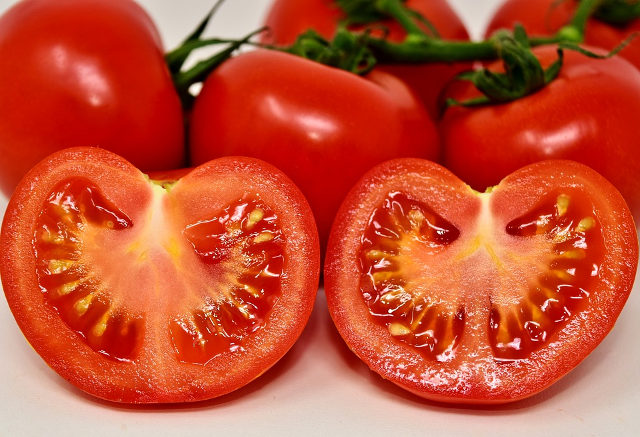 When I was a child I was a very finicky eater. I had a set of things I could eat, and I enjoyed those things very much, and in truth I ate too much of them. My mother was an excellent cook, and she was obviously puzzled by my refusal to eat so many of the things she served up. I’ve known difficult children, who are capable of conducting food wars in a power struggle with their parents, but I wasn’t like that. It was just that certain foods made me feel sick, and if someone made me eat those, I actually threw up. I really couldn’t stop that happening.

It took a long time to work out what this was all about, and I worked hard at it, because it puzzled me. Now I know what was going on, but I’m none the wiser as to why it was like that. Tomatoes, for instance. I liked tomato soup, and tomato sauce, but trying – or being forced – to eat some fresh tomato, brought on strong waves of nausea, and any adult with the sort of strong views about children and food (thankfully these are fewer and farther between than they were then) discovered that forcing me to eat such things caused me to make a revolting mess.

At least three groups of tomato-related sensual difficulty
It turned out to have nothing to do with the taste, and all to do with the sensation of the tomato in my mouth. I’m sure we all have these feelings occasionally. I know people who eat almost anything, but feel total revulsion about the idea of sliding fresh oysters into their mouths, bitor chewing snails. Cooked spinach makes some people uneasy, and sprouts, and we just assume that it’s the taste, because we think of eating as being all about taste, obviously. Except it’s not. Texture is important too, and the look of the food. And the smell. Some people are put off by strong cheese, or the mould on the rind of some cheeses. I could make a longer list, and no doubt you could add to that. My particular difficulty with food ended after childhood, when I worked out that it was the feeling of the skin of tomatoes that made me feel uncomfortable, and I was able to talk myself into eating it and eventually enjoying it. I wasn’t alone in this. I found that a lot of people have the same feelings, and that there are at least three groups of tomato-related sensual difficulty. Some don’t like the feel of the skin. I remember Billy Conolly’s famous skit about getting drunk in Glasgow, always finding tomato skin in there, even if you hadn’t eaten tomato for months. And diced carrot. But it wasn’t the skin that bothered me.

I was being far more adult that they were
There are people who don’t like the feel of tomato seeds, floating in their jelly-like cluster inside. I know people who cut those out and leave them on the side of their plates. But I always rather liked them slipping around inside my mouth, evading all my efforts to bite them. Some people even have a problem with the white inside core of the tomato, revealed when you quarter them, and they won’t eat that. What caused me difficulty turned out to be the feel of the inside of the tomato skin. A bit like a soft, slick walnut, or the inside wall of your chest, coating your ribs. I have no idea why I felt like this about that, but it stopped me from eating tomatoes for years. Funnily enough, when I realised that I actually liked tomato and my physical revulsion had such a precise focus, it was easy to change. And now I’m a tomato lover, and I like the feel of peach skin, and pineapple chunks, and mandarin segments, and jelly, and so many other things that I couldn’t eat as a child. The only thing I still avoid, although it doesn’t make me feel sick any more, is coconut. I can eat it, but I prefer not to, and I can live with that. I just wish that more adults around me had understood that at the time, and let me off all that unpleasantness. I couldn’t have school dinners, because they insisted at my school that everyone should eat everything on their plate, and there were embarrassing showdowns sometimes if I had to stay, with me explaining patiently that I would be sick if they made me eat it, and them becoming more and more angry, and me finally proving my point by spewing up chunks of pineapple all over the table, and them believing all the time that I was some sort of spoilt child. I believed then, and still do, that I was being far more adult that they were.

Many of us have become allergic to finding things out
All this is by way of trying to suggest that there’s usually more to anything than we might be currently imagining. Nobody ever gets anywhere worthwhile by just charging ahead without much of the important information they should learn before they start. I’m afraid that this idea is becoming out of fashion, and that saddens me, because we have access to so much more information than we ever did, but many of us have become allergic to finding things out. We don’t learn as many facts as we could about anything any more, we’ve stopped weighing them up and coming to the most reasonable conclusion. Instead, we just take a position and shout about it as loud as we can. There’s a lot of that about lately, and I don’t like it. There was never a time when all politicians were honest and actually believed what they stood up and made speeches about, but it used to be better than it is at the moment. Slogans and rhetoric are all designed to appeal to those people who prefer the knee-jerk to the thinking. Like the famous money we were going to be able to spend on the NHS after Brexit, stuck on the side of a red bus and endlessly repeated. Nobody was ever asked to justify that, or taken to task for talking rubbish, and it surely was rubbish. Please, someone, if you have any sort of information that could make any sense about that money, let me know, because nobody has ever been able to do that.

Nobody ever asked him how it would be possible
I remember two things that were said when we went to war in Iraq. Back in 2001 there was an attack on US soil by a group of Saudi terrorists, led by a man who was trained and funded by the American secret services to help them in the war between Iraq and Iran. In order to respond to this attack, Bush went to war with Iraq, even though there was no connection between Iraq and the attack on New York. How could that ever make sense? I have never heard anyone make any sense of it. And look at how well that turned out. At the same time, Blair involved us in that war, by claiming that Saddam Hussein could bomb us ‘within 45 minutes’. He stood up in Parliament and said that, and MPs voted to go to war, and nobody ever asked him how it would be possible for Saddam Hussein to do that bombing. Several years later, after all the slaughter and the terrible consequences we’re still suffering, Blair admitted that he had received a memo stating that there were Iraqi troops in Iraq who had mortars, and that they could have fired some of those across a valley in the general direction of some of our personnel. Nobody, as far as I could tell, ever got him to explain how he could have interpreted that as the ability to bomb us. Very few MPs stood up to challenge him, or have since. Mostly, I suspect, because they’re too embarrassed to admit that they got caught up in some sort of mass frenzy. I don’t find this sort of thing very funny, because I expect some thought and rationality from my leaders, and a sense of honour. And generally, I find that they’ve become worse since, rather than learning anything useful from that sort of mistake.

A flight from reason
Even worse than that, in my humble opinion, is that there’s a sort of insanity that’s invaded the minds of most of the people, because we’ve decided that the way we feel about things is more important that what’s right, or good, or sensible, or logical, or takes account of the facts. Many people don’t accept this, many take advantage of it and ride it like a blind surfer, grabbing whatever power or advantage they can get out of it, and most people just respond without thought to whatever ridiculous thing is said by whoever happens to be shouting into a microphone on the television. Sometimes I worry about this. I know we’re not perfect, and we have to work hard to survive and bring up our children, and it’s hard work, trying to make sense of an increasingly complex and confusing world, but I don’t remember a time when there was such a flight from reason. Perhaps I’m not old enough. Perhaps this sort of thing and its inevitable results haven’t happened in living memory, and we’ve forgotten what happens when we abandon our respect for rights, and law, and public morality. Perhaps we’re destined to make the same mistakes, generation after generation, with all the terrible consequences, and we seem to be powerless to prevent it happening. Again and again.

A missed opportunity
After the Second World War, all the nations of the world came together to set up the United Nations. That in itself was a triumph, but in the setting up there were fatal flaws, built in by powerful nations to protect their own interests. There’s the Security Council, in which any one country can simply veto any decision made by the others, and prevent any action being taken. Hence Iraq, and Syria, and the Crimea, and Yemen, without challenge or consequence. And who knows what next. What a missed opportunity that turned out to be.

I know this sounds like sour grapes, but when I hear these self-righteous politicians and businessmen stand up and justify their actions and deliberately looking-the-other-way in all these areas, and I can’t hear any sense of responsibility in their voices, I can become a little despondent. There was a time when government ministers were required to speak with reason and clarity, and they were called to account for what they said. They were even expected to resign if they behaved badly or were found out to be lying. Where has that gone?

Funnily enough, I never got used to that.

Pineapples, Nipper? We never had them at school! However, I expect that they’ll be available after Brexit…