Isle of Wight’s Liz Cooke has created a set of flags for each leg of a Greenpeace expedition, sailing from the Arctic to the Antarctic to document the state of our oceans 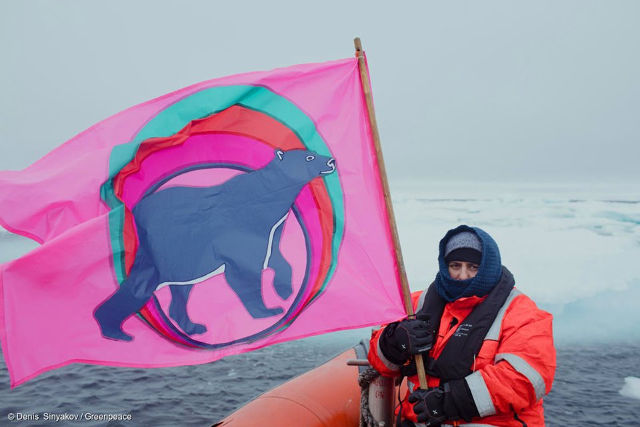 If you’ve been to a music festival in the last 10-15 years you will, no doubt, have seen beautifully-designed and colourful flags flying high across the festival site.

It’s also more than likely they were made by the creative hands of Islander, Liz Cooke.

However, Liz’s flags are not just limited to music festivals. Over the last few months they have also been flying high on Greenpeace vessels.

Solar-powered off-grid workshop
Based in deepest darkest St Lawrence, Liz first started making a series of flags for Greenpeace back in April.

Passionate about environmental issues the planet is facing, the flags were made in her off-grid workshop, powered by a solar panel which runs the sewing machine and soundtrack from BBC6 Music.

The Greenpeace flags were made of a mix of materials, end of roll spinnaker off-cuts in various grades, and new marine grade ripstop.

“There’s one set of flags for each leg of an expedition that’s sailing from the Arctic to the Antarctic to document the state of our oceans.

“The campaign has now reached the UN and negotiations are under way to create a Global Oceans Treaty that could protect 30% of our oceans by 2030.”

Protect the Oceans Campaign
The Greenpeace ship Esperanza is on an expedition in the Sargasso Sea, a unique region in the North Atlantic Ocean that is home to a diverse array of marine life, including loggerhead and green sea turtles.

The journey, part of the “Protect the Oceans” year long tour, will see Greenpeace and University of Florida researchers team up to study the impact of plastics and microplastics on marine life and the importance that the Sargasso’s drifting Sargassum seaweed habitat has for the development of juvenile sea turtles

Liz’s flags can be 100% recycled and all the off-cuts have been used in craft projects and decoration for her kids areas at Rhythmtree Festival and Isle of Wight Festival.

“Thanks so much to Joss Whipple for all the materials advice, Ratsey and Lapthorn for the spinnaker fabric and Emily Buchanan for being so great to work with.”

Well done Liz, these are stunning!!