Ours is only the third hospice in the country to have an Admiral Nursing service, and it has been marked with the unveiling of a plaque by Lord Howard. 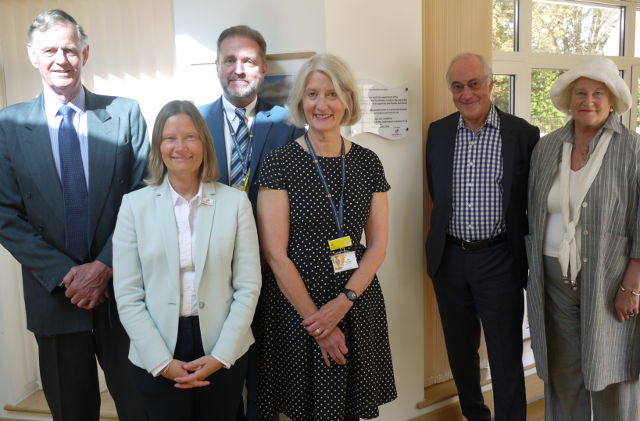 The appointment of Earl Mountbatten Hospice’s first Admiral Nurse has been celebrated with a visit by Rt Hon. Lord Howard of Lympne CH, QC on Friday (23 September 2016).

Lord Howard was welcomed to Earl Mountbatten Hospice as Chair of Hospice UK, a national charity which supports the work of 200 hospices across the country. He was given a tour of the Inpatient Unit and John Cheverton Centre, and took time to view the new Chelsea Garden.

Admiral Nurse, Jill George
Later, he unveiled a plaque to commemorate the appointment of Admiral Nurse Jill George and the growing partnership between the hospice and Dementia UK, the national charity which governs and supports the Admiral Nursing model.

“I am particularly pleased to be associated with this event, because one of the things we need to do in the hospice movement generally is to extend the care that we provide.

“That includes extending it to people who are living with life-limiting conditions other than cancer and increasingly hospices are widening the reach of their services, especially in providing vital care for people with dementia and their families.”

15 years ahead of the rest of the UK
Nigel Hartley, Chief Executive, said:

“It is really important that hospices look to their communities and begin to develop their services for the future, in order to meet the challenges and needs that are arising.

“The uniqueness of the Isle of Wight, as we know, is that we are 15 years ahead of the rest of the UK in terms of older people and, in particular, people coming to the end of their life with dementia. I think one of the challenges is how we support people who are nearing the end of their lives with multiple, complex conditions.

“The appointment of our first Admiral Nurse is a step in the right direction and the start of a growing area of our work.”

Role made possible through tireless fundraising
Highly experienced end of life community nurse specialist Jill George has now begun her new role as an Admiral Nurse a specialist dementia nurse, and an important part of which will be the training of other staff and volunteers in dementia awareness and care.

Jill’s post was made possible thanks to a tireless fundraising campaign by Lady Sally Grylls and former High Sheriff Ron Holland. Thanks were given during the visit to fundraisers and Dementia UK for their support.

“This is only the third hospice in the country to have an Admiral Nursing service, so it is a very exciting development on the Island.

“I’d like to say a huge thank you to the Island’s community and fundraisers who have made this post possible.”