The project celebrates the Island based manufacturer’s contribution to the UK economy, advances in offshore wind technology, and the rapidly falling cost of electricity from offshore wind. 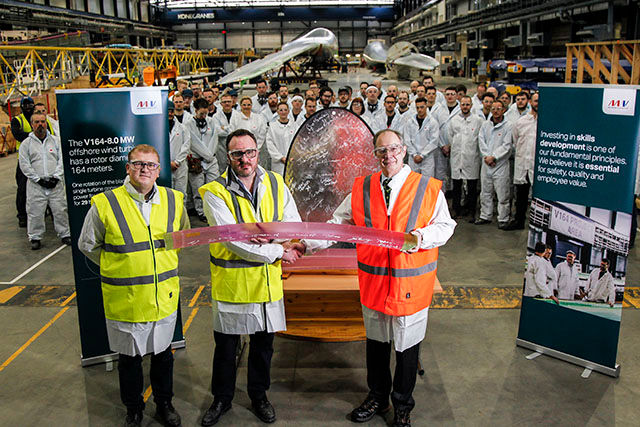 The Isle of Wight Conservative MP, Andrew Turner recently visited MHI Vestas Offshore Wind near Newport, to launch an exciting new project which celebrates the Island based manufacturer’s contribution to the UK economy, advances in offshore wind technology, and the rapidly falling cost of electricity from offshore wind.

The project will follow blade components signed by over 30 MPs and Peers, including Andrew Turner, and dignitaries from across the UK during a reception at the Houses of Parliament at the end of 2016, from production to installation and into operation. The signed components will be split between two blades; one destined for Walney Extension Offshore Wind Farm in Morecambe Bay.

The second will be one of the very first offshore wind turbine blades ever manufactured in the UK and then exported to a Continental European offshore wind farm in Germany (Borkum Riffgrund 2 Offshore Wind Farm).

The winning schools will win a bespoke STEM (Science, Technology, Engineering, Maths) workshop from representatives of MHI Vestas Offshore Wind’s Isle of Wight manufacturing team and offshore wind farm service and maintenance team. The winning schools will also have the use of Oculus Rift virtual reality technology for an entire week at their school to get as realistic as possible understanding of these giant, world record breaking offshore machines.

Official handover
Andrew Turner attended a ceremony at MHI Vestas Offshore Wind’s Island facility to mark the official handover of components for The Parliamentary Blades and to congratulate the production team.

“This is a wonderful project that highlights the skills and expertise we have here on the Isle of Wight. We have many high-value engineering firms that are competing successfully on the world stage.

“MHI Vestas Offshore Wind has invested significantly in their facility here and employs over 300 people on the Island. I am pleased to be able to support The Parliamentary Blades Project and look forward to following its progress to its installation.”

Meeting the team
As well as officially handing over the components, Andrew Turner also received a tour of the state-of-the-art facility, observed the build process and met with several MHI Vestas team members that will be working on The Parliamentary Blades.

“MHI Vestas are really proud of the team here on the Island. We have a highly-skilled and dedicated group of men and women that are at the vanguard of advanced manufacturing, helping to ensure that offshore wind becomes the most competitive large-scale electricity generating technology.

“We are investing approximately £1 million in a partnership with the Isle of Wight College supported by Solent Local Enterprise Partnership that will enable our Island-based team to gain a range of qualifications including City & Guilds Composite Engineering.”

These turbines produce enough electricity in a single rotation from one individual turbine to power an average UK household for 29 hours (13,3 KWh), and have significantly reduced the cost of producing electricity through offshore wind.

newest oldest most voted
nbelfitt
If only their was some big wind farm project which would provide more jobs and low energy for the Island. Wait you mean the their was a projected(pushed by Lib Dems) at Navitus Bay? Which was then canceled a by the Tories right after the 2015 election. Hmm…. The ground on which Mr Turner and his party stand on on this island is getting smaller and smaller… Read more »
Vote Up00Vote Down
Caconym

Turner needs to be careful supporting anything to do with wind turbines.

Turner wants to conveniently forget the past for this company and Vestas would like it swept under the carpet.

There are people here who will never forget.

– We will never trust them again.

Was that LibDems as in Cllr Blezzard (pro-Tory) or Cllr Barry (anti-Tory) ?

With you there Rod.

It really is about time that people who post reactive comments had to use their real names. I wonder if onthewight posters here would do so if there was a basic form of accountability? Keyboard warriors have zero credence with the educated reader, due to being able to post inflammatory and often unfounded comments here

Astounding hypocrisy from someone who had a go at me on another post under this pseudonym. A little consistency would not go amiss

Astounding hypocracy, lol. Typical over hyping of a situation we have all come to expect from IW Councillors.

So suruk the slayer can post any rubbish, under a ridiculous pseudonym with no comeback and does not have to quantify statements! And people read this and are informed!!

My pseudonym is merely the name of a character in a book (the hilarious Chronicles of Space Captain Smith, by Toby Frost) and doesn’t make me any more or less anonymous than you.

People in glass houses shouldn’t throw stones, as they say…..

It was because of these sort of unquantifiable and unaccountable keyboard warrior comments I left this “discussion” forum many, many months ago. This whole system rarely supports any constructive arguments and more than often degenerates into bickering, arguing and personal disagreements. It’s no more than an arena for posturing and egotistical displays. Perhaps I’ll check back in a year.

Going to miss you.