After last year’s Isle of Wight festival Newport’s Quay Bridge was closed to traffic. OnTheWight has been trying to find out from the council what they think led to the closure. Finally, after six weeks, they’ve answered. 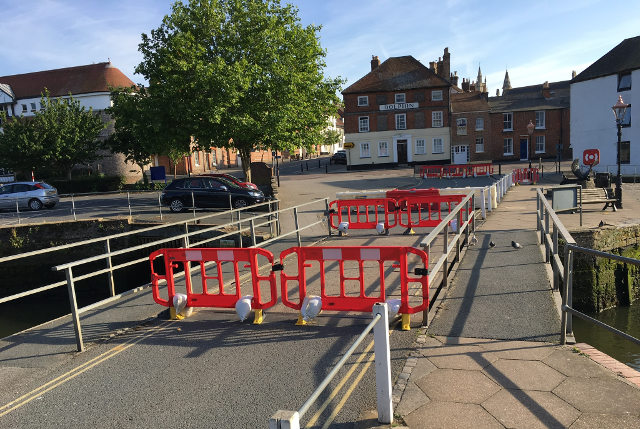 When the temporary bridge over the River Medina at Newport Quay was installed for the Isle of Wight Festival at the beginning of June, there had been some suggestions on social media that the bridge had been weakened in previous years by the heavy Festival traffic.

The bridge had been closed to traffic in June 2017 after it was discovered to be unstable.

OnTheWight has been on the case pursuing this for just over six weeks, after initially asking the council to ask if they had investigated whether the stability of the bridge had been affected by the Festival traffic. They have today provided a response.

IWC: “Deterioration is due to corrosion”
A council spokesperson told OnTheWight,

“We estimate the bridge was constructed in the early 1960s and from photographic evidence, was certainly in place in the 1970s.

“The bridge spans a tidal river and on each high tide, the lower part of the supporting steelwork becomes immersed in salty (brackish) water.

“Consequently, the deterioration is due to corrosion over time as a result of regular exposure to this brackish water.”

“There is no evidence that overloading or use by festival traffic has contributed to its current condition.”

However, they did say last month,

“The bridge will be closed to vehicles until the new bridge is installed, which is likely to be July/August.”

We’ve asked for an updated on when that might by and will add here once we hear back.

newest oldest most voted
Highwayman
I don’t doubt that corrosion is the problem, but the present bridge was constructed by Medina Borough Council in late 1975 (I think) to replace the previous swingbridge which had become dangerous. I have a photo I took in September 1975 showing the old bridge still in place, in a sorry state of repair, complete with temporary ‘Road Closed’ sign. I think there was some discussion at… Read more »
Vote Up14-1Vote Down
richardshanklinite

I notice the council didn’t state which July/ August if its like Island Roads give it a couple of years.
Why not consider a joint costing with Southern Water incorporating a sluice gate so they can extract water when there are shortages.

Of course it wasn’t festival traffic. If it was use by heavy vehicles, then you’d have to take into account the many, many coaches that have traversed that bridge over the years.

Vote Up10-1Vote Down
davimel
I think it somewhat strange that our glorious leaders have just noticed that the lower part of the bridge gets a tad wet at certain tide events. Surely the implications here are that with a modicum of maintenance and repair over the years we could have kept the bridge open ad infinitum! Once again absolutely no forward planning or even a passing interest in the bridge by… Read more »
Vote Up9-1Vote Down
Geoff Brodie