Bridge over Newport Quay – closed for a year – temporarily reopens. Long term use under discussion

The bridge has been closed since the end of the Isle of Wight Festival last year, but following negotiations between the council and Festival organisers, a temporary bridge went in today – until 27th June. There’s hope it might stay longer. 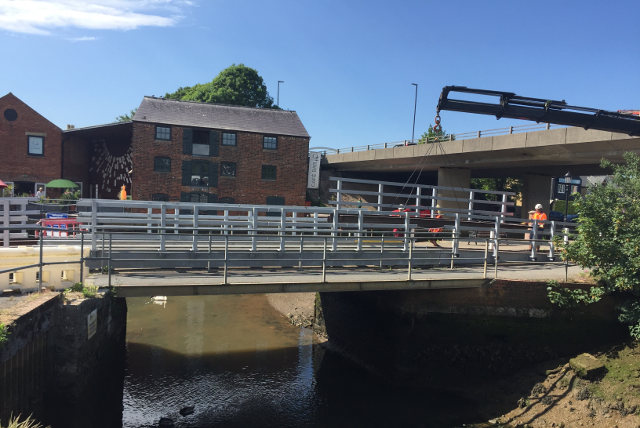 Anyone who uses the pedestrian bridge at Newport Quay to gain access to the Riverside Centre and Quay area from Sea Street, will be aware of work taking place today (Monday).

A special temporary bridge for small vehicles and a large volume of pedestrians is being installed ahead of next week’s Isle of Wight Festival, currently due to remain in place until 27th June 2018.

The bridge was closed to traffic in June 2017 after it was discovered to be unstable. Since then, only pedestrians have been allowed access, with traffic diverted via Fairlee Road.

The bridge will have a 6ft 6ins width restriction and will be used to allow access to Newport Quay from tonight until 27th June.

Hopes for bridge to remain?
OnTheWight understands there is hope that the bridge could remain following the festival period, but negotiations between both parties are still ongoing.

Comments made on the Council’s own Facebook Page questioning whether the weight of articulated lorries using the bridge during last year’s Festival period had an impact of the stability of the bridge. OnTheWight has asked the council whether they carried out any investigations to determine what has made the bridge unsafe.

We’ll update here once we hear back from them.

4 Comments on "Bridge over Newport Quay – closed for a year – temporarily reopens. Long term use under discussion"

Do we really need a bridge there anymore? Couldn’t it be replaced with ginormous pipes and then a reinforced concrete top. Has anyone seen any boats sailing up there?

I think it’s beyond the limit of navigation anyway, so it’s not necessary to allow waterborne traffic.

However it may be the channel needs keeping open for flood relief rather than enclosing in pipes.

Waterbirds and other wildlife live there and where would you propose the pipes to begin?

within the extremes of the bridge not knowing the width I guess 2 or 3 pipes 6 foot high would do the job or 3 on the bottom with 2 on top. I dare say the council would need to have yet another expensive consultant to advise them so give it 5 years and we might get somewhere.