No main Isle of Wight Pride event for 2019

The announcement was made following Saturday’s AGM. Other events will take place throughout the year building towards a main Pride event in 2020. Cllr Love addresses the homophobic comments made on social media. 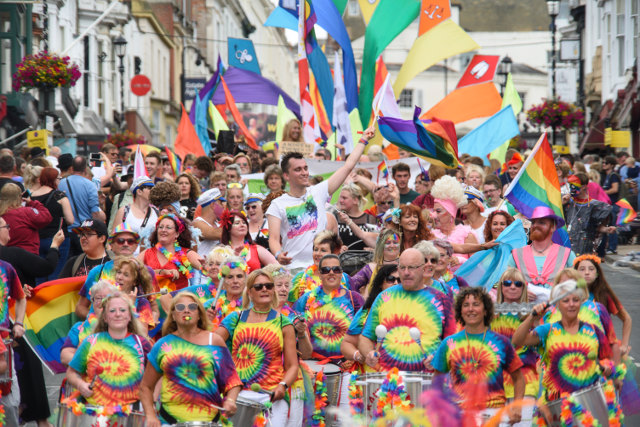 Following Saturday’s crunch Annual General Meeting (AGM), it’s been announced there will not an Isle of Wight Pride march this summer, as the Trustees made the decision to skip a year.

Last year the Isle of Wight won the chance to host UK Pride alongside the second ever Island Pride event.

Official announcement
It was explained after the AGM that although the main Pride event will not take place on 20th July as previously announced, other events would take place throughout the year, building towards a main event in 2020.

A decision was made that there would not be an Isle of Wight Pride event for 2019, but that exciting plans were afoot to build a sustainable community event for 2020 with a five year plan to help Pride become a staple part of the Island’s events for many years to come.

“Whilst there is sadness in a focal Pride event not taking place in 2019, Pride is not about just one day and there will still be a lot of background work taking place, including community events throughout the year, training with schools and building support and guidance and love for the Island’s marginalised LGBT+ community.”

New trustees
Organisers went on to explain that three new trustees had joined the board:

“With an increase in Charity Trustees as a result of the meeting, the future for the Islands LGBT+ Pride charity is bright and promises to bring a Pride March and event in 2020 to coincide with the 50th year anniversary of the Gay Liberation Front being formed, an organisation that Peter Tatchell was heavily involved with and an organisation credited with being a springboard for many of the LGBT+ rights that people in the UK celebrate today.

“Pride will still be looking for volunteers to step forward to help with the many community events that they will be attending in 2019 and plans for 2020 will begin soon with aspirations for something that the Island will treasure and be proud of.

“The new Charity Trustees who joined as a result of today’s meeting are Andrew Newman, Laura Fraser, Peter Leonard.”

With the Ryde Slide also cancelled for this year, the news that Pride will not take place as planned is a blow for many of the town’s businesses.

“The homophobic attitudes being expressed online are reminiscent of those from the 1990s when I was first brought, by the Isle of Wight council and health Authority to our Island, to support our LGBT+ community.

“They wanted to educate Islanders about the oppression and fears of difference and HIV.

“I ask Islanders to please resist these negative attitudes and challenge it wherever you hear such hurtful things. Education and knowledge are the most powerful tools that can help change our Island people’s opinions and unit us as one people. ”

Love: Deeply saddened by comments on social media
He went on to say,

“Pride is no different from from any other cultural festival that occurs within society today, be it cultural or spiritual difference. Today Pride is a festival of hope and celebration of difference and diversity.

“I’m deeply saddened to see people pitched against one another on social media and that does not help bond our communities or represent our Island communities to the world as we would all want.”

I am allowed to have an opinion, Good.