Tuesday night saw the very first Rubble Club event – organised by Chalkpit Records and opening the Ventnor Fringe Festival – take place at a secret venue. It went down a storm and more are planned for later in the year. 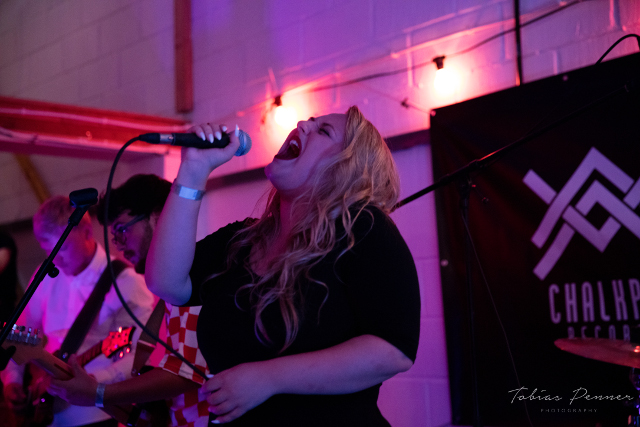 Welcome to the Rubble Club
Held in the secret venue (these change every year and have previously been held in underground bunkers, deep basements, old banks and clifftop hideaways) this sold-out event featured three live performances from Isle of Wight musicians and bands. As we entered the secret venue (a former industrial warehouse in the process of being converted into creative studios) we were handed a custom-made lanyard with an intriguing little key (all were different) and Chalkpit/Rubble Club artwork (produced by Islander, Carlie McGarity – check out her other work it’s ace!).

Building trust
Silas Gregory, the man behind Chalkpit Records explained the thinking behind the keys,

“The keys were significant to everyone that decided to become part of The Rubble Club’s first event. We wanted people to walk away feeling like they were a part of something bigger, which they now are.

“By gaining a key, you have gained our trust in keeping the secret of The Rubble Club.”

Soulful and emotionally charged
To get the evening of live music started, Swan Levitt (aka Josh Woodford) treated audience to a spot of acoustic folk. A recent signing to Organ Records (set up by music producers Boe Weaver) with an album being worked on as we write, Swan Levitt shared his soulful, lyrically-driven songs with an appreciative audience.

Infectious energy from the word go
Taking the middle slot of the evening was five piece indie-pop band, Nakamarra.

Signed to Chalkpit Records and featuring Silas himself on drums, Nakamarra were bursting with infectious energy from the word go. Singer, Charlie Jones’ powerful voice instantly grabbed the attention of the audience and with the support of her band members, had the audience mesmerised for the entire set.

Rhaining Mermaids
The very first Rubble Club was brought to a close by the ever-wonderful Rhain (aka Rhian Teasdale).

Used to seeing Rhain perform solo, it was a welcome treat to see her supported by four of the five Plastic Mermaids, another Isle of Wight band, who Rhain regularly performs with. There are moments when you can’t help but think of Kate Bush when Rhain is singing, but her voice is so incredibly distinctive and spell-binding, the comparison is short-lived. What’s the next gig for Chalkpit?
Silas says they already have the next couple of events lined up, the first being in October, and it’ll be stepping up a gear.

“We want to celebrate music in style by throwing the most exclusive events, there are no rules on what a music events should be like, so we want to put the excitement back into live music. But be warned this event will only happen twice a year.

“Next time we aim to go bigger than better than the launch. So if you missed out this time, once tickets are announced you better be quick before it sells out.”

Chalkpit Records
Chalkpit have been working with Nakamarra and another Island band, Ecsess for about six months.

Both who are writing new material which will be released later this year.