Leader of Portsmouth council said it was not appropriate to be asking people to inform on others in this way. “We don’t live in a society where that is acceptable.” 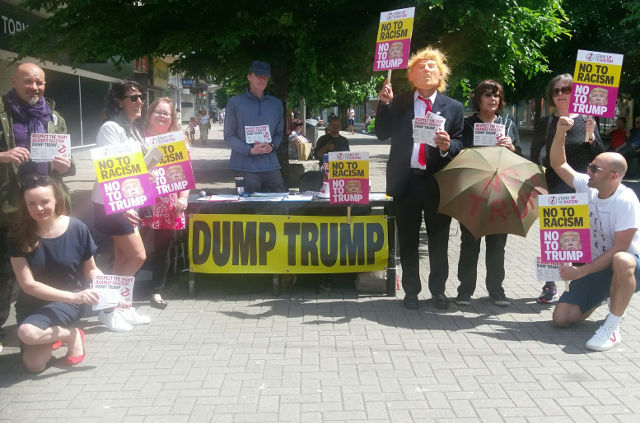 In an email, which was withdrawn ‘immediately’, Portsmouth City Council workers were encouraged to provide descriptions, social media profiles, telephone numbers and vehicle information of those ‘seeking to disrupt’ the event.

But Hampshire police said the wording of the request that referenced terrorist activity, crime, disorder and protests did not include peaceful demonstrations.

“We’re not stopping people from carrying out lawful protest.”

“The community partnership information form was shared with staff who are familiar with it and know it is for reporting illegal activity. At no point was there any intention that anyone would consider reporting peaceful protest.

“As soon as it became clear there was ambiguity in the message it was clarified to staff that it did not relate to peaceful protest in any way.”

The Portsmouth branch of Unison lodged a formal complaint about the email that was sent last week.

“The inclusion of reference to “protest” remains controversial as peaceful protest is a vital part of a democratic society which has a long and respected tradition in the UK.

“There is not typically a requirement to give prior notice of a lawful protest.”

Leader: “Not appropriate to be asking people to inform on others”
Leader of Portsmouth council, Councillor Gerald Vernon-Jackson, agreed. He said,

“It was really inappropriate.

“Within a democracy people are allowed to protest. It’s not illegal and it is not appropriate to be asking people to inform on others in this way. We don’t live in a society where that is acceptable.”

On Saturday, June 1 a protest against Trump was held in Commercial Road in Portsmouth and in Cosham by members of the Portsmouth Together Against Trump group.

And a petition against Trump attending the D-Day 75 event in Portsmouth has garnered more than 83,000 signatures.

Guildhall protest
A peaceful protest against Donald Trump’s visit is planned to take place in Guildhall Square on Wednesday, 5th June – away from the commemorations on Southsea Common.

“I hope there won’t be protests around the common as I think that will take away from the focus that should be on the veterans. If people are going to protest there is a gathering in Guildhall Square.”

Jones: “This week is bigger than any of this”
Tory boss Cllr Donna Jones added:

“This week is bigger than any of this. We should only be interested in the veterans. We should all have the utmost respect for those who gave their lives for this country. By protesting you are making this about Donald Trump and not about D-Day.”

Everyone has the right to peaceful protest, and hey at least the orange haired baby is not coming to the Island.

I doubt that Portsmouth had any choice as to whether Trump attended the D-Day commemoration, but had it foisted on them…