The boundaries of 30 Isle of Wight council wards (divisions) will change with the new recommendations from the Boundary Commission, as well as many name changes. 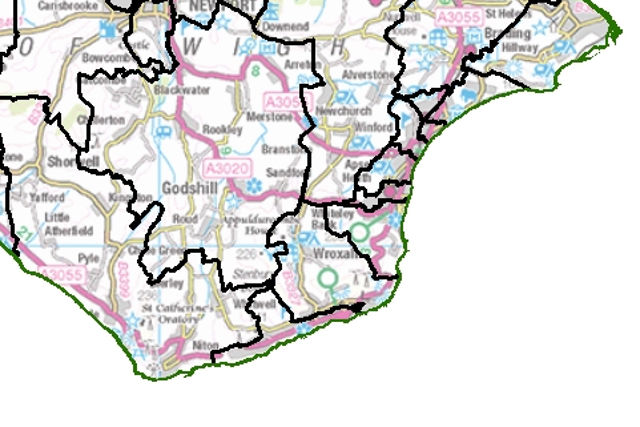 Marcus shares this latest news from the Boundary Commission. Ed

Today’s publication of boundary changes on the Isle of Wight follows three phases of public consultation and draws new boundaries for each council division across Isle of Wight.

The boundaries of 30 current council divisions will change as a result of the review.

“We are extremely grateful to people across Isle of Wight who took part in the review. The Commission has looked at all the evidence that was put forward during the consultation.

“We believe these recommendations deliver electoral fairness for voters as well as reflecting community ties throughout Isle of Wight.”

In response to local feedback on the plans, the Commission made major changes to the proposals in some parts of the Island and held an extra phase of consultation on them earlier this year.

Changes in the West
In the west of the Island, the Commission changed its original recommendations so that the shopping area around Avenue Road would be part of a Freshwater division rather than Totland as previously proposed.

The Commission also changed its proposals so that the area of Colwell would be part of the Totland division rather than Freshwater as previously proposed.

Ryde boundaries
In Ryde, the Commission clarified its proposal for the boundary between Ryde North East and Ryde South East divisions so that it would run along West Hill Road and Park Road.

The Commission listened to local objections regarding its draft recommendations and put forward a new plan for two divisions, each to be represented by one councillor.

Following the latest phase of consultation, the Commission confirmed all the changes it previously proposed as final.

Name changes
Elsewhere in Isle of Wight, the Commission has changed the names of several divisions in response to local views as well as making boundary changes to divisions in light of evidence put forward by local people and organisations.

For example, in the Bay area, the Commission has decided to change its draft recommendations in favour of a pattern of divisions that is largely the same as the current arrangements.

What happens next
Full details of the final recommendations are available on the Commission’s Website.

The proposed new arrangements must now be implemented by Parliament. A draft Order – the legal document which brings into force the recommendations – will be laid in Parliament in the coming months. The draft Order provides for the new electoral arrangements to come into force at the council elections in 2021.

All of the wards relate to current town or village names, except one! We have Central Rural – why can it not have a real name?

Marcus from the Boundary Commission’s list is incorrect. No. 22 is Newport Central and No. 27 is Ryde Appley and Elmfield.

That was my error – now corrected, thanks for the heads-up