The ambitious redevelopment plans have been scrapped. OnTheWight asked Red Funnel how it would affect their relocation plans. 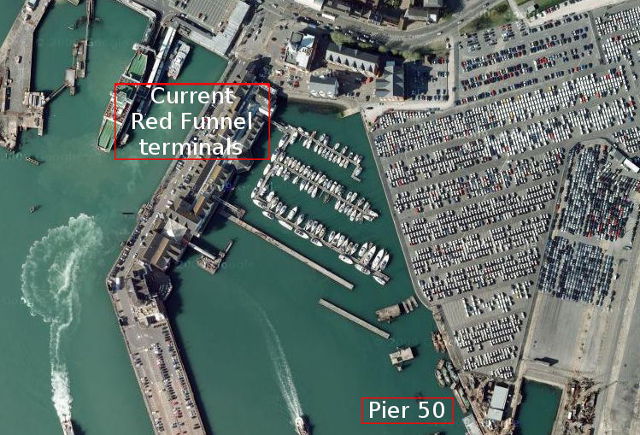 Earlier in the week it was announced that the £450m waterfront redevelopment on the site of the Red Funnel terminal in Southampton had been scrapped.

First announced in 2014, plans for the relocation of the Red Funnel terminal to Pier 50 were approved in 2016,

Red Funnel: Willing to be involved in future discussions
On hearing news of the set back, a spokesperson for Red Funnel told OnTheWight,

“Red Funnel is aware that Southampton City Council has ended its agreement with RPW Southampton Ltd for the proposed Royal Pier Waterfront scheme, which would have led to the relocation of our Southampton operations.

“We are disappointed that this major development and opportunity for Southampton has not been completed. However, we remain very willing to be involved in future discussions about the potential redevelopment of the Royal Pier and Southampton Waterfront area.”

Kuti Miah, is calling on residents, businesses and councillors to work together to find investors to develop the waterfront.

It also said it would continue to work with waterfront landowners, Associated British Ports and The Crown Estate, as well as the occupiers, to explore the potential for deliverable development plans for the Royal Pier.

It would be far more use for foot passengers if the Red Jet stayed where it is!