A collection of Bembridge residents took a large inflatable biscuit to Bembridge Parish Council meeting to show their support for their fellow resident who previously got into trouble for offering biscuits to the clerk. 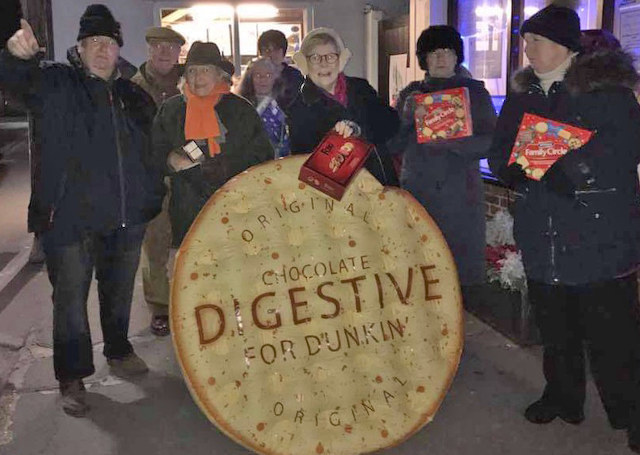 Bembridge Parish Council held an extraordinary meeting last night to discuss a ‘legal matter’ – possibly related to the legal papers filed with the High Court over the proposed sale of 5-7 High Street, Bembridge.

Residents have been in touch with OnTheWight say they were denied access to the meeting, with one parishioner telling us they felt the choice of venue and time of the meeting was “a premeditated move to disallow public access”.

Police called
They went on to say that “a couple of members of the public attempted to enter the office and were told in no uncertain terms to get out. The door was literally slammed in their faces – so hard that the letterbox flap fell off”.

According to the residents, the damage was “blamed on the Parishioners outside” and the police were called. They go on to say that when the police arrived, they “joined in with the banter and general good-naturedness of the gathering outside”. 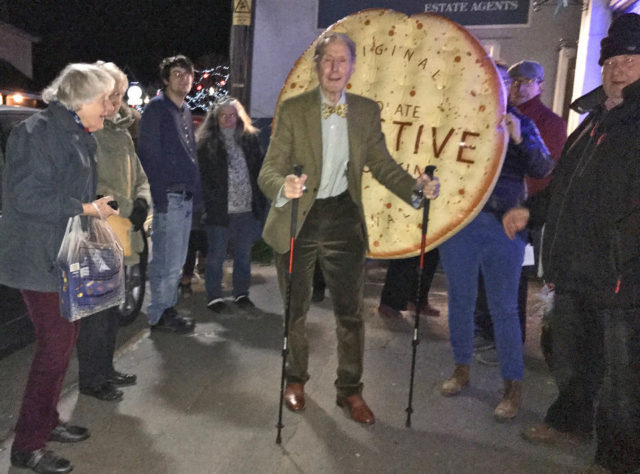 Biscuits for the needy
Following an incident last week when Bembridge resident, Alexander Hopkinson Woolley (pictured above in the bow tie, next to the giant digestive), was banned from attending any BPC meetings or BPC properties after attempting to hand over a box of biscuits to the clerk, it was suggested on the ‘Open Bembridge’ Facebook Group that residents attending the meeting take along a box of biscuits, which would be donated to the Pop-Up Soup Kitchen (PUSK).

Earlier today (Thursday), Madeleine Reeder delivered a stack of biscuits to Trevor Blaney (PUSK), all donated by Bembridge residents in protest to how Mr Hopkinson Woolley had been treated. 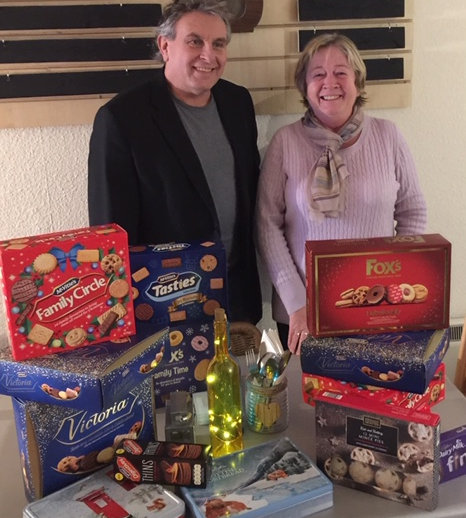 Response from BPC
OnTheWight has written to the BPC Clerk and Chairman a number of questions relating to the events and will update once we hear back.

So sad that Bembridge has to go through all this nonsense !

No it isn’t – its hilarious!
If you want to see Stalinism in action get on the No.8 bus to Sandown.

Vote Up8-2Vote Down
objective1
Septua Council meetings are ALL open to the public to observe and report on – this is a legal requirement. The public have time at the beginning of meetings to ask questions and make points. If the public and press are to be excluded for specific reasons then a vote must be taken as per the 1960 Act. None of this happened in Bembridge and the public… Read more »
Vote Up18-1Vote Down
pet50

Good luck with waiting for any answers to your questions to the PC!

Hang on! I spot an imposter! A packet of mince pies

TV companies really ought to get hold of this as it is a scriptwriters dream for a very popular new soap.

where can I get an inflatable digestive?

Councils are allowed to have closed meetings to discuss confidential matters, but that should be publicised as such.