There were some great efforts from the Ryde Rowing Club at the weekend, when they competed at the Coalporters Rowing Club Regatta 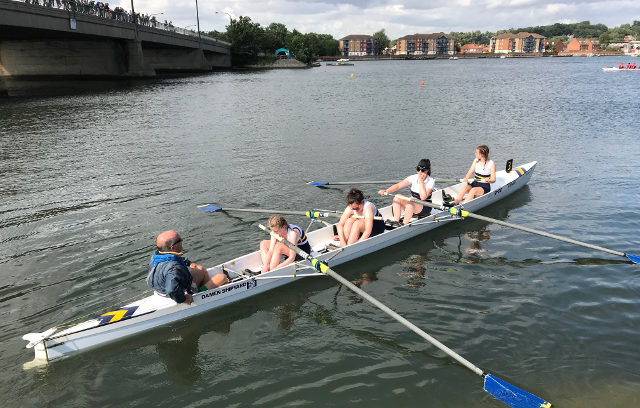 Men’s Senior Four
The Men’s Senior Four of Ollie Bottrell, Matt Allsopp, Mike Ewing and Mark Chatwin, with Bryony Reeve coxing comfortably won the semi-final to gain a place in the twice-round the course final, where they just missed out to their main rivals BTC to take second place.

Men’s Junior Four
The Men’s Junior Four of Ben Sanderson, Tom Starkey, Tye Cameron and Austin Smith with Dan Sanderson Coxing showed an improvement to make it through to the semi-final narrowly missing out on a place in the final.

Men’s Novice Four
The Men’s Novice Four “A” crew of Harry Jones, Paddy Kearney, Gully Roghan and Frankie Leftley just missed out on a place in their semi-final but the “B” of David Baer – in his first competitive race for the club, young Dan Sanderson, Sebastian McKeown and seventy-two-year-old Dave Kirby from Southsea performed well to win their heat – and narrowly miss out on a place in the final.

Ladies Novice Four
The young Ladies Novice Four (pictured) of Poppy Starkey, Freya Drage, Niamh Edwards and Emily Davis won their heat with comparative ease but were beaten into third place in the final by two older and larger crews.

Men’s Junior Sculls
In the Men’s Junior Sculls Joel Smith fought his way through a heat and a semi-final to earn a place in the final where he finished in third place and the Club’s Senior Sculler Mike Ewing won his heat comfortably only to be disqualified the taking the wrong turning buoy.