A few years back small numbers of ships started mooring off the south west of the Island, but since lockdown the number has gone up considerably. Their massive engines are running constantly bringing engine exhaust and constant vibrations. Here’s the background and what residents are saying 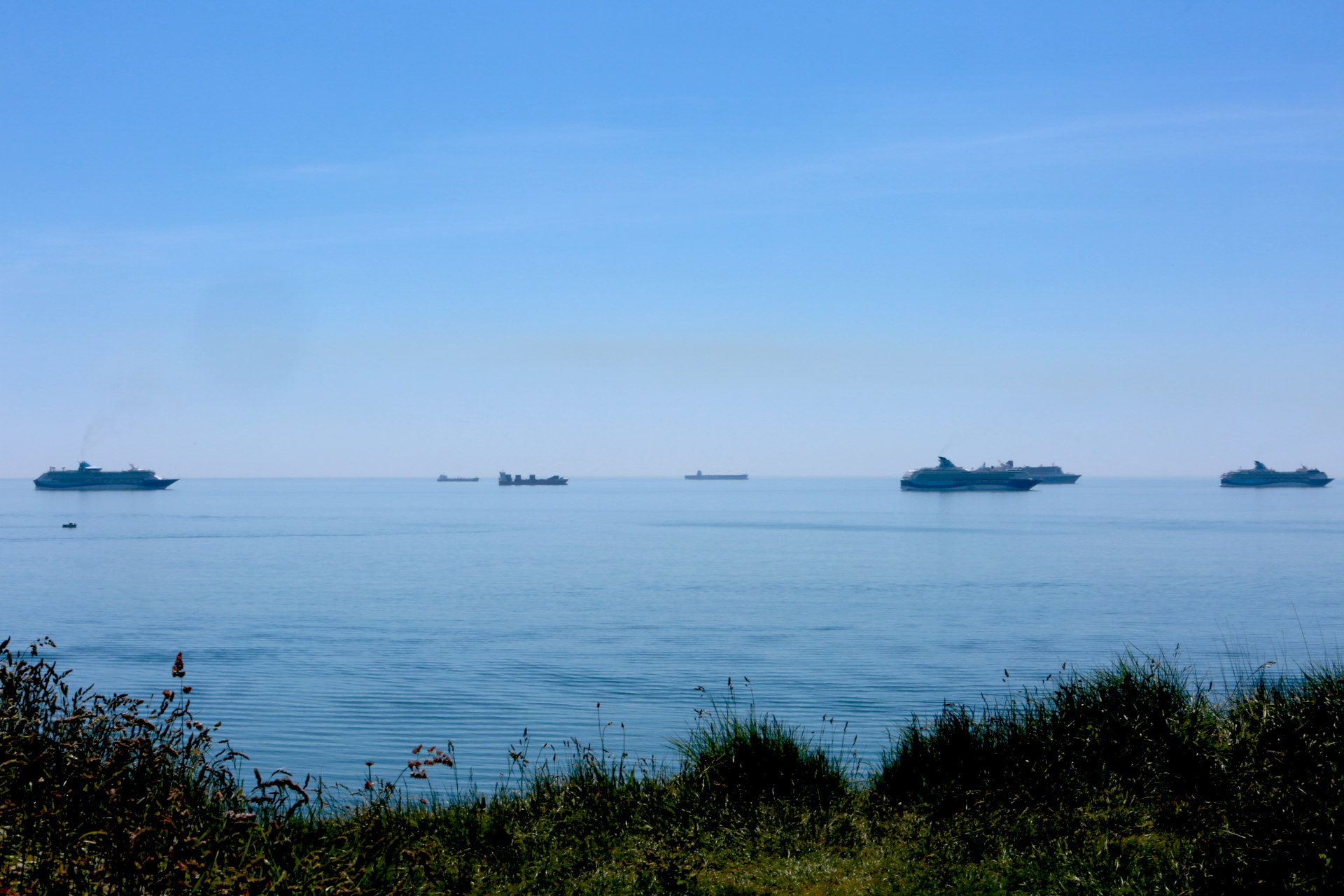 Sleepless nights, nasty smells and loud noises are just some of the things Sandown residents say they are having to endure as the Bay is turned into a maritime pay and display during the Coronavirus crisis.

They are worried the use of the bay to berth cruise ships, tankers, ferries and car carriers will become a habit, affecting water standards and quality of life in the town.

A large number of ships have also been parking as far south as Ventnor since lockdown, with residents experiencing similar issues.

Throbbing, low-pitched vibrations
One resident, who lives in the bay area, said a throbbing, low-pitch sound was heard last Wednesday as far afield as Culver and St. Catherine’s Point, that reminded him of a drum and bass rave, but was coming from a ship docked in the bay.

“You could not get away from it — it went on for hours and caused enormous distress to many, many people. The sound got inside my head and made me feel quite nauseous and panicky.”

Luccombe residents felt ‘houses moving’
Another woman, who lives in Luccombe, said she and her neighbour had both felt their houses move as a result of the ships’ engines being turned on.

“They are very pretty to look at, I have no problem with them being there, it’s just the constant rumbling and intolerable noise.

“I can stand in my house and still hear the noise of the generators. But it is also concerning about the potential pollution, the Island’s tourism relies on her beaches and if the sea is filthy it will affect it.”

Concern about damage being caused
Another woman, who lives on the Cliff Path, said there had been some terrible smells last week through the night, drifting up from the Bay.

“People are concerned about the level of damage the ships can do.

“Sandown has worked hard to get better quality water in the Bay, we don’t want to spoil it now or damaging the Bay long term.”

MCA: No complaints received
However, despite the worry of pollution the Maritime and Coastguard Agency (MCA) has said no complaints have been registered with them about the ships and there have not been any reported incidents of pollution.

The Isle of Wight Council has said though it has been made aware of noise issues relating to the vessels in the bay and are currently seeking clarification on jurisdiction and possible actions in relation to the matter.

Jurisdiction hard to pin point
The MCA said vessels anchored south of the Island should have liaised with the Queen’s Harbour Master Portsmouth prior to giving a position for anchorage.

The Queen’s Harbour Master in Portsmouth said only two of the Nab Anchorages outside of Sandown Bay fall within the boundary of the Dockyard Port of Portsmouth, but the management of them rests with ABP Southampton.

ABP Southampton, which preside over Southampton docks, said the Bay is outside its jurisdiction, but a spokesperson said while they do provide traffic information to support the safe navigation of vessels in the area, they do not manage or monitor their movements.

Ships in UK waters have to comply with legislation governing anti-pollution rules and environmental protection — with the MCA in charge of making sure vessels don’t break environmental rules while they are anchored in the area.

MCA: Action will be taken if pollution occurs
The MCA said should any pollution occur they are informed immediately and will ensure appropriate action is taken, liaising with other authorities where necessary.

“Routine counter pollution surveillance of UK waters and the UK Exclusive Economic Zone is carried out using satellite radar and manned aircraft surveillance. Reports of pollution from ports and harbours, passing ships and members of the public also contribute to this surveillance and reporting picture.

“While specific environmental monitoring of the anchorage areas is not undertaken, legislation and at-sea monitoring is sufficient to ensure the MCA is notified of any pollution.”

The ships can choose to stay in the Bay for as long as they see fit, with no timeframe in place, and apart from putting a complaint into the MCA, there is not a lot residents can do about it.

Andre: Their presence is largely welcomed
However, others have welcomed the ships — Cllr Debbie Andre, leader of the Island Independent Group and ward representative for Sandown North, said over the years the ships passing through or temporarily moored off the Bay have been a regular sight.

“While there has been some concern regarding any potential environmental effects, their presence is largely welcomed.

“Those of us who are fortunate enough to live in this beautiful bay appreciate the feeling of safety that being part of this community brings and hope that it can continue to be a safe haven for all throughout this crisis and in the years to come.”

Thousands unable to return to loved ones
Director of Advocacy and Regional Engagement of the Mission to Seafarers said they have been made aware of the situation in the Bay and have been working tirelessly to provide support during the pandemic to seafarers internationally.

“The Mission to Seafarers is acutely aware of the many seafarers currently on board ships off the South Coast of the Isle of Wight and many thousands more around the world unable to sign off and return to their loved ones.

“In the UK, the Mission has been working with port agencies and welfare groups to provide access to communication for seafarers to remain in touch with their families and launched an online Chat to a Chaplain service for seafarers wishing to talk to one of our trained port chaplains.”

I’ve lived here 20 years,right by the sea,the only difference is the cruise ships which have anchored here during lockdown,and they alternate between here and Portland.
I have never smelt or heard anything from any ship and as for house moves in Luccombe-I thought the pubs were shut……….

To be fair there was the generator type noise the other night when the wind was blowing on shore in the Shanklin direction. i expect Sandown get it when the wind blows in their direction but the bonus would be it blows the smell away from the sewage works!

Sandown Councillors have let the town slide into such an embarrassing condition the sewage works are quite a highlight these days.

Vote Up170Vote Down
ian123
I have heard the deep throbbing noise a couple of times from Ventnor, and it was mildly irritating, no more than that. And less so now that I know where it is coming from. I don’t really understand the Sandown councillor’s comments, which suggest she doesn’t really understand the situation. These ships aren’t floating there for their safety or for ours; they are there because there is… Read more »
Vote Up10-1Vote Down
jon101

It’s the Invasion Force, they are just waiting for a full moon of cheese, keep your children safe.

I forgot to add a /s, for those without a sense of humour.

Does no-one else remember the great cause for alarm in Sandown Bay, in the 1990s – a ship suspected of being loaded with illegal armaments was brought to the Bay and anchored there for ‘safety’ reasons – ‘Whose safety? Not ours’, residents cried. I think in the end no armaments were found: it was a false alarm, but Islanders thought it showed the authorities’ contempt for us.

Shouldn’t the owners of these ships be paying parking charges or council tax?