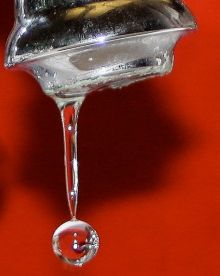 Following a debate in Parliament held by the Island’s MP, Andrew Turner earlier this year, a meeting has taken place between senior staff from Southern Water and representatives of Chillerton residents who believe they are entitled to water at a reduced rate under a legal agreement made in 1907.

Sir Charles Seely provided the benefit for 999 years for villagers and future residents when he gifted land at a peppercorn rent to Shanklin District Urban Council; many properties have the rights included on the deeds of their homes.

Southern Water’s position is that the right to free or cheap water has long since ‘expired’, but nonetheless provide free water to some recently built properties, whilst denying it to others built at the same time.

Four years fighting for resolution
A number of residents who have been trying to sort the issues out for almost four years have formed the Chillerton Water Action Group (CWAG) working together to try to bring about a resolution.

George Nightingale and Stephen Rowntree, represented CWAG at the meeting, which was also attended by Isle of Wight Councillor Peter Bingham and Cllr. John Kingston, Chairman of the Parish Council.

Southern Water apologise for inconsistencies
Mr. Turner said, “What particularly concerned me was that Southern Water had stated that the legal agreement was no longer valid without properly considering the position. It is a financial giant of a company with a turnover of over £650m – they knew that residents could not afford to take them on in the courts.

“They were also acting unfairly in giving some residents free or cheap water, but refusing it to others in exactly the same position. To be fair Southern Water accepted today that they have acted inconsistently in the past and have apologised for that. It was a positive meeting which gave villagers the opportunity to put forward their arguments to Southern Water.

“They have agreed to consider the points raised carefully and bring forward a plan to resolve the issues within the next three months. All local residents affected will then be able to consider their proposals.”

Delighted the parties got together
Cllr Peter Bingham added, “I am satisfied that this is now being dealt with at a high level within Southern Water and that following this meeting they have a much better understanding of the issues.

“Nobody is pretending this will be easy, not least because the two sides have received conflicting legal advice but I am delighted that the parties have finally got together and all are determined to find a resolution.”

Image: Randy Son of Robert under CC BY 2.0

newest oldest most voted
abc
Credit to Mr Turner, Southern Water’s high-level decision to meet people from Chillerton and discuss the ‘free water’ issue was no doubt largely due to his intervention and raising it in the House of Commons. I did wonder, however, if Mr Turner was involved in the talks â€“ the headline says he was but the article is ambiguous – or left it to others, as he never… Read more »
Vote Up00Vote Down
No.5

everybody should pay the same for water and some archaic decesion should not muddy the water.

Vote Up00Vote Down
Mr. E
No. 5 – I understood that you hold adherence to the rule of law in very high regard, but it appears I was wrong! – Your opinion on this matter is ill conceived. A contract is a binding contract – we might not think it’s ‘fair’ that a small number of Island residents don’t pay for their water, but it doesn’t make you holy, just because you… Read more »
Vote Up00Vote Down
No.5
wrong…law is not holy and law is not based on history…law in this country is based on precedent…its tru failing. Contracts are based upon a system of assumed face to face deals and are always broken based upon a precedent that any contract cannot be held to be constraining on the individual or company to carry on commercial trade. This contract is not viable because the residents… Read more »
Vote Up00Vote Down
peppercorn

Many houses have been sold on a 999 years leasehold at peppercorn rents of only a few pounds rent per annum.

Can the leaseholders now demand more realistic groundrents as the original contracts were drawn up so long ago?

Doesn’t sound like any progress at all to me. I would imagine that the issue was already being considered by those high-up in Southern Water, in their legal department. 3 months to resolve the issue after which the parties can consider the proposals merely means after 3 months Southern Water will propose that the Chillerton residents pay, just like the rest of us have to.

Vote Up00Vote Down
DAVE JONES
Re comment from No 5; I would just say that if you have a legal contract with a company, they will hold you to it. A contract is a contract. If they are allowed to get away with it just because it is inconvenient or was made a long while ago (how far back do you go before a contract becomes archaic?) then no contract will be… Read more »
Vote Up00Vote Down
No.5

The contract was made before modern development in water sanitation and delivery. I am perfectly happy for Chillerton to retain its free water supply, but not at the cost of Southern Water..they should pay for their own sanitation and maintance

I agree with your last comments No5 – Surprise, surprise.

Vote Up00Vote Down
DAVE JONES
Not sure where you live No. 5, but if you are lucky enough to live in an area where BT have provided fibre optic cable, thereby enabling you to enjoy high-speed internet, you are being subsidised by those of us who have to pay the same rate as you for an inferior service. That also is not fair, but happens to be life – which is not… Read more »
Vote Up00Vote Down
BigEars
The terms of a leasehold are cast in stone. Let us hope that nobody listens to the poorly informed utterances of No.5. I hold a leasehold property with a very long lease left to run. I would not thank No.5 if the status of my lease is weakened and ‘special circumstances’ are allowed to slip in. My freeholder might get it into their head that they might… Read more »
Vote Up00Vote Down
No.5

No I don’t get fibre optic..hope I will and hope everybody will.. Another argument that doesn’t work.

Let them keep their free water…as soon as the main is holed, and sewage runs through the street and they have to pay for it to be repaired the tune will soon change

There are dozens if not hundreds of ancient laws which are not adhered to anymore on the basis that they have been ‘dated out’.