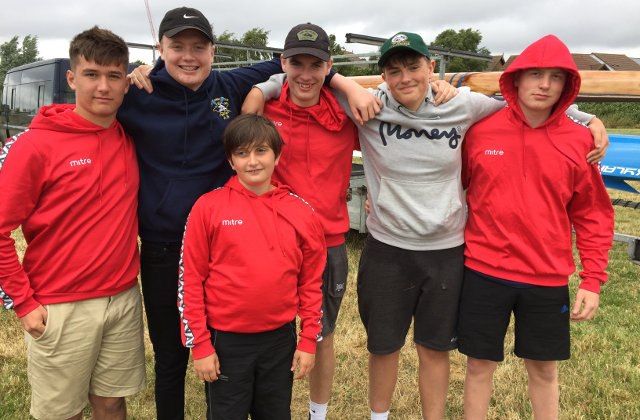 Hopes were high that the Club’s Novice Four would finally fulfil their potential and win their status after a number of second places and the Club was not disappointed. As the crew of Josh Lee, Tom Starkey, Tye Cameron and Austin Smith got off to a great start in the extremely challenging conditions.

As the race progressed their advantage grew and after an excellent turn by the Cox Daniel Sanderson, which earned him the “cox of the day” award they won by a distance to gain promotion to Coastal Junior status.

Scullers
The Club’s Senior Sculler, Dale Buckett, in just his second outing of the season and at this status also raced exceptionally well to finish in second place in his final – all the more remarkable for a capsize earlier in the race while leading, where he was able to get back in and complete the race.

However there was disappointment for Coastal Junior Sculler Joel Smith who also capsized while in contention in his race.

Ladies Coastal Junior Pairs
In the Ladies Coastal Junior pairs race there was another fine performance from the Clubs J16 Ladies – Grace Bolland and Freya Drage – again racing against adult and higher status competition – who managed a very respectable fourth place in the day’s most difficult conditions – which lead to the cancellation of the J16 events where the Club also had crews due to compete.